One of the interesting things about the Persephone Books website is the link to http://thepersephonepost.blogspot.com/ which offers an unusual, historical picture, often of women reading, working or just as an alternative view of the world. Here is today’s 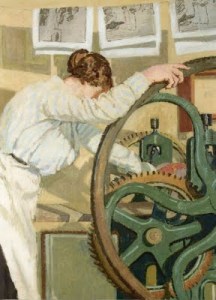 which is an interesting image of a woman operating a printing press. I’m using it today because I want to post about Persephone no.86, To Bed with Grand Music by Marghanita Laski.

This book,  in some ways, fulfills the expectation of a book by this small but excellent publishing house.It is written by a woman in the twentieth century and it certainly warrants reprinting. I enjoyed it. It is a book set in World War Two, and features a young wife and mother, Deborah, left to look after her small son while her husband is posted to the Middle East for the duration.But this is where the book begins to diverge from the expected. Instead of being yet another ‘brave woman on the home front’ account, Deborah exploits the freedom offered by an absent husband and a willing housekeeper to go to London and find a job. She begins by regretting a one night stand and becomes a solitary, respectable war worker returning to the countryside at the weekend. She changes into a different person gradually, staying in London more, meeting a man and then another who change her life view.

What is so good about this book is the depiction of her reasoning with herself which enable her to justify to herself what she is doing. It is written in the third person, but accurately captures her thought processes, even when the reader is willing her to make a different choice, take different action. Not that I would condemn her outright; women were in a unique position of being given so many new choices and responsibilities. The traditional ways of life were going, and women for the first time had more than marriage, home and children to concern themselves with. This is a short book, with an understandable heroine. I liked reading this alternative view of what women really did in wartime, and it is another memorable book in my Persephone collection.