After various visits to exciting bookshops, including one on a hill in Buxton (Scriveners Books, friendly staff and you can watch hand bookbinding), I thought I would look at a book I actually got through the post from the ever lovely Dean St Press. 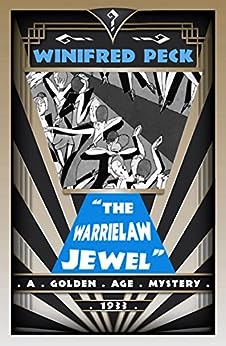 Winifred Peck wrote two mystery novels, and they have turned out very differently. To say that The Warrielaw Jewel is more domestic sounds like a criticism, but in this case it is a compliment. It deals with Edinburgh life before the First World War, written from the perspective of a woman newly married into the society of ancient families, strange obsessions, and beliefs about inheritance that defy logic. Betty’s husband is a lawyer, well versed in the history of families who live to strict rules of their own devising, but who are keen to drag in the law prove a point. This makes it sound dry, but it certainly is not, as early cars screech around, gentlemen detectives detect, and the plot becomes increasingly convoluted.

Betty is introduced to two of the Warrielaw family when they call to see her, on the surface as a bride, but really hoping to talk to her husband John about the legal knots that the family has tied itself into over inherited property. Apart from a large house and garden, the burden of the squabble seems to be a jewel, not of fabulous value for its stones, but for the workmanship which is so exquisite that it seems not of human origin. Within days the jewel is stolen, petty jealousies rise and a murder has been committed. The sound of cars rushing around, mammoth walks and the narrator falling asleep at unlikely times add up to an engaging mystery, which cannot and will not be easily solved until the last gasp of available time.

The plot rapidly becomes complicated and motives assumed and discarded in the face of a mystery played out across the city. As with Peck’s other novels, it is a mixture of the dialogue and the characters that really engage the reader. Little clues of speech reveal much, as a chief suspect learns of his peril and replies with “In the midst of death we are at breakfast time. Let us send out for some sausages.” His clothes, noticeable in a crowd, contrast with those worn by his aunts, being carefully described in their colour and style to reflect the personalities of the wearer also assume some significance in other ways. Peck notices and describes (in her fictional creations) the telling gesture, the glimpse through a window which reveals so much. The style of writing is so elegant, so assured, that the reader is completely engaged, not only to solve the mystery, but to revel in exactly how it was done.

I really enjoyed this novel, partly as a murder mystery published in the Golden Age even if set before the interwar years, and partly because it is a tale of a society complicated by tradition, some wealth and some pithy observations about families and women within and without them. As in Peck’s other reprinted book, Housebound (Persephone no.72), the houses and streets, gardens and even vehicles assume importance as Peck obviously enjoys visualising the settings in which she has set her fully realised characters. Romance, risk and a satisfying pace make this another excellent read from Dean Street Press, and I am very grateful that they supplied me with actual copy of this memorable book.

3 thoughts on “The Warrielaw Jewel by Winifred Peck”