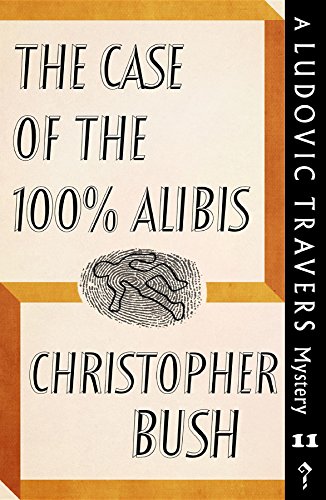 The clue is definitely in the title of this book by the accomplished Golden Age Detection writer, Christopher Bush. The problem in essence that a murder has definitely been committed, there being no question of suicide or natural death. Yet everyone concerned “has the most beautiful twenty-two carat, diamond- studded alibi.” as one of the senior policeman investigating, George Wharton, publicly admits. Bush is a master of the impossible murder mystery, yet a respectable number of suspects can all prove that they were elsewhere at the time of the murder which can be pinpointed with unusual accuracy. This is not a case of a broken wristwatch indicating the time of death, a phone call summons the police to the scene of a fresh murder. Of course the redoubtable Ludovic Travers gets involved in this seemingly case of several suspects all being in full sight when the murder was committed; it is only using inspiration and that resolves this case of an unlikable victim whose murder seems destined to remain unsolved. This 1934 mystery, reprinted by Dean Street Press, is an always impressive display of coincidence, cunning and persistence which leaves no stone unturned as our detectives both professional and amateur are determined to find out exactly who committed a murder when no suspect was seemingly present.

Mr Lewton is dead. He is also a very unpopular man, a common thing in a victim dispatched in the opening chapter of a murder mystery. Thus the reader has little sympathy for someone whose own servant disliked him, who had business acquaintances rather than friends, who was noted for his flirtatious remarks to the doctor’s wife rather than genuine friendship. As Wharton, providentially on the scene when the report of the murder arrives soon discovers, there are several people who feared this man, whose interests were better served by his death than his remaining alive. Yet all of those who had motive were in public sight when the crime was committed, even the actor nephew whose financial circumstances were such as to require a timely inheritance. An inquest takes place, mainly in order to encourage a response and helpful leads from an eagerly interested public. It is only when Travers and his faithful manservant Palmer get involved that inspiration and dogged persistence win through.

This is a representative novel in the Ludovic Travers series, but it is definitely a standalone book. Fans of this author will sink happily into familiar characters pushing new barriers to get a result if not always complete justice. I was glad to see that Jane Wharton’s contribution is valued; if I have one complaint about these books it is their brushing aside female characters as mere plot devices. Here, however, Jane does contribute and her appreciation of detective novels as “very clever” sums up Bush’s novel well. This book makes use of an intriguing Prologue which serves both to drop a tantalising clue or two, as well as reintroducing the gentleman sleuth Ludovic Travers. It is an engaging book which features a crime that seems to defy detection but which eventually yields to studied investigation with inspiration. I was glad to receive this review copy and recommend it to all fans of the detection of ‘impossible’ crimes.

I have not posted so much as usual over the last week as I have been battling with an essay, but more excitingly, helping with wedding preparations! Making bunting for a marquee does take time, and I keep seeing triangles of fabric everywhere. Meanwhile Daughter and son in law to be are still working very hard so all hands on deck!

4 thoughts on “The Case of the 100% Alibis by Christopher Bush – An Impossible Crime?”