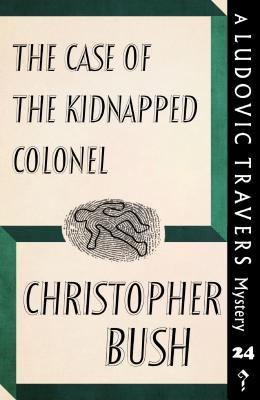 Wartime life, scientific secrets and mysterious death all contribute to an unusual and well developed mystery with military overtones. This is the twenty fourth Ludovic Travers novel, one of three which captures the wartime experience of the author, like its predecessor “a novel and interesting environment described with evident knowledge” as E.R. Punshon, a fellow author wrote. The tone is confidently knowledgably, the complex plot an elegant construction, and Travers is as always more than competent in his working out of what is really going on. This is a well worked out novel with fascinating elements of wartime life. I was glad to receive a copy from the publishers, Dean Street Press, as part of their reprints of Bush’s novels.

This book is the first one in the series which is narrated by Ludovic himself, and it gives a different voice to the novel. Wharton again appears from the beginning of this book, which adds to the sense that it is building up to a murder, or at the very least a disastrous mystery. Wharton’s presence is only one confusing element in a new posting for Ludovic, as he finds himself in a set up in rural England where a top secret base is established in the family home of a Mrs. Brende. Her husband, Colonel Brende, is the leader of a group of scientists working on a radical new aerial defence technique, which is incredibly secret. Ludovic’s role is to guard the establishment, a task which is made more tricky by local opposition. An air raid occurs when an exercise by the local Home Guard is taking place and in all the confusion there are enemy parachutists and an unfortunate accident. Family tensions make the whole situation more complicated, and a disappearance makes Ludovic wonder if his instincts for the innocent and guilty are correct. Wharton and Ludovic unofficially band together to sort out what is going on in a confusion of disappearing soldiers, secret liaisons and old mysteries.

The switch to Ludovic as narrator is perhaps challenging to get used to for anyone who has previously read books in this series, though it is important to note that this book, like the others, can be enjoyed as a standalone mystery. It does mean that the reader can enter into his thought processes, which is fascinating given his sometimes careful and consistent breaking of alibis and sudden understandings of motive. I found this book a little difficult to follow at times, though it soon gains momentum as several mysteries deepen. As always the characters are well established, and in this book Bush does well in describing the female characters rather than them being mere figures to forward the plot and confuse the issues as has sometimes happened previously. In this book Penelope is particularly well realised, as her actions and speech are carefully developed and understood on several levels. This mature and well executed mystery novel is as always a fascinating read, and I recommend it for anyone who enjoys a sophisticated character driven book in an atmospheric setting, with some subtle humour.

It is really impressive how much Golden Age Detection writing is around at the moment. Dean Street Press as always are producing some really good books, reprinting some real gems. It is also good that they reprint non crime books by some undervalued authors, often women whose excellent books have slipped out of the mainstream. Writers like Ursula Orange and D.E. Stevenson have or are reappearing, along with my favourite, Winifred Peck. Worth popping onto their website http://www.deanstreetpress.co.uk/ to look for the perfect gift for a hard to please Bookworm!

Meanwhile life goes on at the Vicarage. A Christmas Coffee morning and a Craft afternoon in aid of the mental health charity MIND beckon, as well as a Christingle service, a memorial service and Advent procession… It is a great life, as long as you don’t weaken!