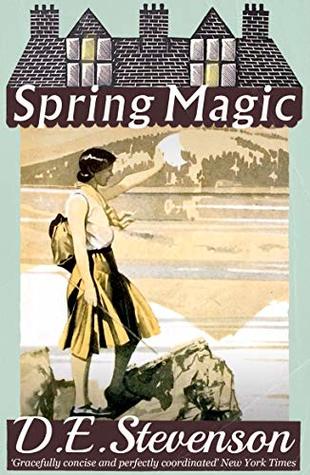 Dorothy Stevenson wrote many good books in the middle of the twentieth century, and this is one of the most approachable and delightful. While on the surface it is about a young woman who travels to a small Scottish village to escape the drudgery of working for impossible relatives and the bombing of London in the Second World War, it is actually a sincere look at relationships. Stevenson wrote many books in the mid twentieth century, some featuring a number of characters on a series basis. This book is a one off, but still achieves a certain lightness and insight. It combines excellent characterisations of individuals with an accurate portrayal of complex relationships in both the civilian village and the army base.  The book’s heroine, Frances Field, is a well written character as her innocent view of a new environment and the complications of new people allow the reader to explore alongside Francis in her new life. The range of characters is enormous, from the flirtatious colonel’s daughter, the small boy with a big vocabulary, and the secretive lord of the manor. The setting of the small village, seashore and countryside is wonderful, as well as the glimpses of the stricken south of England. The war in the background means that there is threat and change beneath the surface of the narrative; it is significant that this book was originally published in 1942. I am so pleased that the good people of Furrowed Middlebrow and Dean Street Press have given me the opportunity to read and review this most enjoyable book.

The book begins with the twenty five year old Frances coming to terms with her lot as unpaid housekeeper for her selfish and demanding aunt following the death of both of her parents some years before. Her only hope is Dr.Digby, who recommends that she must have a holiday, and she accordingly heads north to a small fishing village, Cairn. She is unsure how to even get accommodation, but manages to reawaken a hotel. This is really helpful when she encounters three army wives keen to find housing near their husbands, Elise, Tommy and Tillie. Through them and their husbands she meets many more people from the army base, including the intriguing Guy.  Frances witnesses much and begins to understand the underlying stories of those on the base and in the village. For a small community there is plenty going on, and Frances has several adventures. While there is a war in the background, this is not a novel of blitz and bombing, but of the way the upheaval and movement of people changes lives.

The general sense of this book is cheerful and hopeful, despite the timing. Much is going on amidst the seashore, hotel and small house, Sea View. This book has an exciting climax, though much of its power comes from the careful build up of characters through the novel. While Frances is seen as an innocent, she begins to see that her new life is very different from her previous invisibility in London, and she becomes involved in the lives of others. Stevenson’s eye for detail picks out the small, significant elements of the surroundings which will have some importance later. She also has a telling way with dialogue which is not only amusing but reveals much about character. I recommend this book to all fans of mid twentieth century literature for its plot, characters and setting, and overall air of optimism from a dark place.

This is only one of the many wonderful reprints of hard to get books from the mid twentieth century written by women. Available in paperback and ebook, they are generally great reads which have slipped from lists unjustly.  Some more wartime books have been recently been made available, and I recommend them (as you will see if you look at some of “their” authors I have reviewed). Why not take a look at their website, where you will find the full Dean Street range https://www.deanstreetpress.co.uk/main/middlebrow ?

4 thoughts on “Spring Magic by D.E. Stevenson – a Furrowed Middlebrow reprint of a cheerful book from wartime”