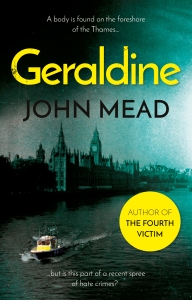 One day a body is found drowned in the Thames. Spotted by Sergeant Hunter, It is quickly retrieved, and it is then that the questions begin. Fortunately Inspector Matthew Merry is on route and he soon has many questions about this body. Sergeant Julie Lukula, his partner, will work in parallel to discover some of the truth behind what transpires to be a complex web of relationships and identity. In the process they and other well described people will discover much about themselves and others. Expectations are confounded as Geradine is far from what she seems to be, even when identification is made and the family contacted.

The world of theatrical agents and complex criminality is explored in a novel that cleverly combines the personal and procedural in the world of London policing. Matthew is seen in the context not only as an instinctive detective, following up on the less technical but more dramatic side of the investigation, but also as a man with a family facing its own terrible challenges. He follows up on a contact who in turn is receiving information that proves to be significant; he also remembers his childhood friends and manages to subtly exploit their mutual history. Julie, meanwhile, uses the data and technical information discovered on what proves to have been a shockingly brutal murder to try to ascertain if there is indeed a link with a series of hate crimes which have affected the small bars and theatres of London’s secret world. Her own relationship has reached a significant moment, and she is seeking a promotion which will change her responses to those she has worked with, especially Matthew. This well written novel with its clearly delineated characters works well on so many levels, raising questions of suspicion, prejudice and fear in a network of people who have all been shaped by difficult pasts. I was pleased to have the opportunity to read and review this excellent book in all its vivid and well placed action.

The book opens with the discovery that Geraldine is a unique character, who has been influential in unexpected ways. The questions about whether Driver has  created hatred and passion personally or whether the motive for murder is part of a pattern of hatred which comes to puzzle not only Matthew and Julie but also the higher ranks of police officers who are forced to test the limits of their power and position. As Julie and Matthew, together with their team which includes the young and enthusiastic Harry, investigate the world of security guards and small theatres, they have to look at the small pieces of information which may link crimes. While Julie involves herself with the minute pieces of information which may obtain results in line with her ambitions, Matthew suspects that bigger forces are at work. His memories of a small group of friends at school means that he secures contact with an infamous character whose lifestyle has attracted attention from other police departments. While he gets information which may prove relevant to more than one case, he pushes the rules to the edge. It is only when he falls foul of those with positions to protect that he has time to consider his wife Kathy, and discovers that she has a vital problem that has severe implications for her life.

This book, which brilliant revisits characters introduced in “The Fourth Victim”, is of itself a complex and clever read which deals realistically with many who are marginalised and meet with prejudice. It is well paced with moments of well handled tension. In this book there is little doubt of which character is speaking fresh dialogue and taking meaningful action. The research is careful and the plot well constructed; it hangs together well as a framework for exploring fascinating and consistently written characters. I recommend this as a good read for fans of contemporary crime and policing.