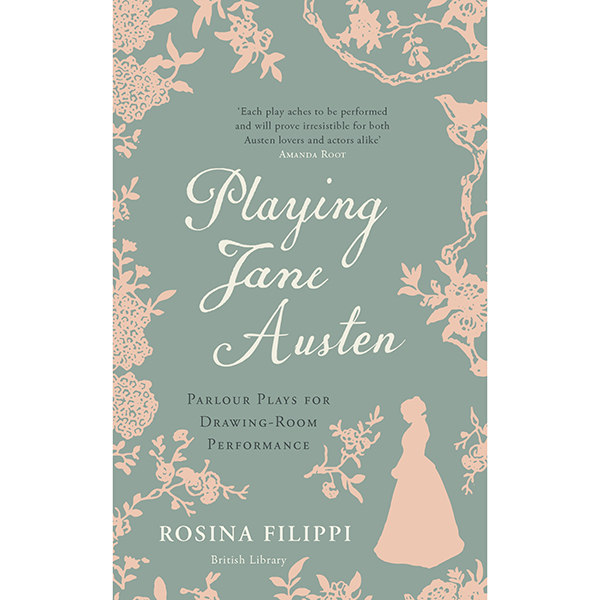 The subtitle of this small book is “Parlour Plays for Drawing Room Performance”, but it is a  book that can be really enjoyed even if you have no drawing room or intention of putting on any plays. It is essentially a book of Austen’s greatest hits, or at least the best of the duologues from four of her novels. Originally in published 1895, this beautifully produced edition of the plays from the British Library includes lovely line drawings from Margaret Fletcher. The Preface highlights the true comedy that lies within Austen’s writings, and these seven little plays reveal the confrontations, conversations and proposals that are so memorable. While there are notes of costumes, these set the visual scene in revealing the type of character and style of dress required in a departure from Austen who spends little time describing even her most central characters. The scenery is minimal, which sometimes reflects a scene indoors which was originally set outdoors. There are little introductions to each play, and monologues which help set the scene. Given the relatively large number of ‘sequels’ available to the novels, especially Pride and Prejudice, this is an intriguing addition to the dozens of books written about Austen, and has the advantage of its original publication being so long ago. In a way it is an early adaptation of small sections of the novels written with a real understanding of the language and times. I feel privileged to have had the opportunity to read and review this book.

The first play features a conversation between Catherine Morland and Isabella Thorpe from Northanger Abbey, which reveals much of Catherine’s innocence and Isabella’s manipulation. The scheming greed of the younger Mrs Dashwood when discussing how much should be given to the late Mr Dashwood’s widow and her daughters is recalled. This is such an excellent scene in every adaptation of Sense and Sensibility that it is right that this section is chosen. The three pieces from Emma is perhaps a bit excessive for one novel, but for many it is a favourite, and Mrs Elton is another wonderful character to play. The two pieces from Pride and Prejudice are the proposal from Mr Collins, with some deeply felt interruptions from Mrs Bennett, and the wonderfully awful confrontation between Lady Catherine de Burgh and Elizabeth Bennett. The latter is of course a highlight of any version of this novel, and I believe Lady Catherine is the inspiration for many a strident aristocratic lady (Maggie Smith or Lady Violet Crawley in Downton Abbey, anyone?).

These seven little plays are wonderful repeats of favourite sections of four classic novels, known to so many from adaptations if not from actually reading the books. Reading these will inspire many to read or reread the full novels, if only because they will realise that the original books are so beautifully written beyond the versions that appear on our screens. At this time of year it is always worth getting ideas for presents, and this would make an ideal gift for anyone with an interest in Jane Austen, or just buy a copy to keep yourself.