A riveting historical novel set in Ireland, 1689. Captain Holcroft Blood is forced to take charge of the big guns in the siege of Carrickfegus. As this is the third book in a series, his character is well established, but as I read this book as a standalone I can confirm it works as an independent novel. Based on an actual person, this character is strangely complex and brilliantly described by this skilful author. As historical military books go, this has great depth of characterisation and the battles, skirmishes and other military action  are so well described as to be understandable and full of suspense. There are quite brutal episodes as is the nature of war, but the violence is never gratuitous and always fascinating.

There are two other men who stride through this novel; Henri d’Erloncourt, Frenchman and agent for King Louis XIV, also known as Narrey, and Michael Hogan, borderline outlaw and unorthodox warrior. As the three men collide, seek each other and endure their relationships, the main battles between the forces of kings dominate the action for better or worse, and the reader gets to see both sides of the conflict. As two women have an influence on what Holcroft thinks, this is a surprisingly well balanced and always interesting book, which I read with great involvement and enjoyment. I was very pleased to have the opportunity to read and review this book.

The book opens with Holcroft writing to his wife Elizabeth, left in London for quite a time as he commands the gunners in Ireland, totally committed to the ritual of preparing and firing the huge guns that can change the course of battle or in this case, siege. He finds a particular reason to fire at an exposed point in the town they are surrounding, as he spots the unscrupulous Narrey, who is directly responsible for the deaths of several of Holcroft’s friends. He is so determined to try and wipe out the agent and his associate that he goes against orders, and is reassigned as a result. Narrey meanwhile is still plotting to promote French interests at all costs, as well as pursuing his own agenda. Hogan is a wonderfully described man on the edge of wildness, motivated by a varying set of reasons, with some doubt as to the best course.

This book was a bit of a revelation to me as someone who has never really read widely in historical military fiction, with some notable exceptions. I found this a genuinely brilliant read, with the main character of Holcroft being truly engaging  in his determination to survive and track down Narrey. Narrey is a tough opponent who is devious and deceptive, and is consistent in his partiality to his own interests. I really enjoyed the small points of character, as Holcroft is attached to his officer’s blue coat which he welcomes back as “a beautiful, warm, homecoming feeling, like a mother’s embrace”. Donald’s skill is in matching the big events with the small details which give the characters real depth. I got a little confused at times as the characters were sometimes referred to by different names, and the variety of mercenaries involved in the battles sometimes made me think hard about which side was which. Overall this is a very skilfully written book which fully engaged my interest throughout, and I recommend it to all fans of historical fiction. 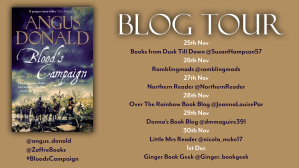 The English Army is besieging Carrickfergus in Ireland. Brilliant but unusual gunner Holcroft Blood of the Royal Train of Artillery (son of Col. Thomas Blood), is ready to unleash his cannons on the rebellious forces of deposed Catholic monarch James II. But this is more than war for Captain Blood, a lust for private vengeance burns within him.

French intelligence agent Henri d’Erloncourt has come across the seas to foment rebellion against William of Orange, the newly installed Dutch ruler of England, Scotland and Ireland. But Henri’s true mission is not to aid the suffering of the Irish but to serve the interests of his master, Louis le Grand.

Michael ‘Galloping’ Hogan, brigand, boozer and despoiler of Protestant farms, strives to defend his native land – and make a little profit on the side. But when he takes the Frenchman’s gold, he suspects deep in his freedom-loving heart, that he has merely swapped one foreign overlord for another.

On the banks of the River Boyne, on a fateful, scorching hot day, two armies clash in bloody battle – Protestant against Catholic – in an epic struggle for mastery of Ireland. And, when the slaughter is over and the smoke finally clears, for these three men, nothing will ever be the same again . . .

Holcroft must decide whether to join the conspirators, including his old friend Jack Churchill, now Lord Marlborough, and support Dutch William’s invasion – or remain loyal to his unpopular king.

Kent–based author Angus Donald was born in 1965 and educated at Marlborough College and Edinburgh University. He has worked as a fruit-picker in Greece, a waiter in New York and as an anthropologist studying magic and witchcraft in Indonesia. For 20 years he worked as a journalist in Hong Kong, India, Afghanistan and London. He is now married with children and writes full time from a medieval farmhouse in Tonbridge, Kent.

Angus is a distant relative of Col. Thomas Blood who is best known for his attempt to steal the Crown Jewels of England from the Tower of London in 1671.

Angus is also the author of the bestselling Outlaw Chronicles. For more information, visit: