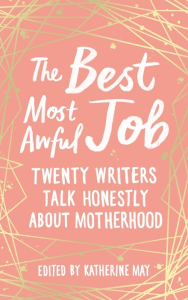 Twenty writers have been brought together to contribute to a book about motherhood. The project has led to twenty very different views, defined by each person’s experience of being a mother in many ways. What draws them together is the honesty that each writer displays in their contribution, some of which comes from a very difficult place. This is not the self congratulatory side of being a mother, basking in the glory of a perfect home, children and relationship. This is about the struggle to become a mother, to fulfil perceived expectations, to cope with the loneliness and the ineffectiveness of being a parent. It is about the shattered dreams and ideals, but also about the feeling of achievement, of deep joy, of fulfilment. The title is accurate in that this book reveals all the good and less good parts of being a parent, specifically a mother. This was a fascinating book to read and review.

This book contains a great variety of reactions to motherhood, ranging from attempts to get pregnant and maintain it, difficult births, post natal depression and the feeling of inadequacy in managing a baby from its earliest days. To an extent that much is predictable in a book about motherhood, the pain of losing a baby for example is well documented. Here the pain is expressed through the description of the search for a heartbeat at a scan, in an intense passage of writing . Post natal depression is a difficult reality to cope with, with no obvious end in sight, as well as the problems of diagnosis. There are the issues of single parenthood, the small problems of not being able to be in the sea with a child when there is no one to guard the valuables, moving into the problems of dating as a parent of a small child. The issues surrounding step parenthood is the subject of a well written piece, taking the long view of beginning with small children and how even a young child can be aggressive, through the gradual building up of trust so that grown up step children are in a good place. The discovery that “gendering” is difficult if not impossible is the subject of another honest piece. The well known poet and writer Hollie McNish provided a powerful piece which is brutally honest in its style. The lyrical piece from an adoptive parent is very moving, about the highs and lows of hoping and waiting for a child.

Throughout the book there is the strong feeling that the writer had believed that they were the only person struggling with balancing motherhood, relationships and a career; this book shows that even in the supposedly enlightened twenty first century people struggle to balance everything. This is a book that can be read in short bursts as well as a sustained session. I found it a varied and fascinating account of an important element of life for many people, and this book should be of interest to most. It makes important comments on the nature and feelings of those who “mother”, even if it is non traditional, and provides a valuable picture of contemporary motherhood brilliantly expressed by a range of writers.

This book is a remarkable achievement, especially given the “Mothering Sunday” season. For many it was a different day, though thank goodness for high tech ways of communication. This is a strong read, and certainly there are some unexpected thoughts expressed.  I found it particularly enlightening.

I think some of us are looking around at shelves of books and wondering why it is proving hard to actually read them. I think that concentration is tricky at the moment, so I am still trying to read enough books for a post a day. Phew! Thank goodness for Netflix!