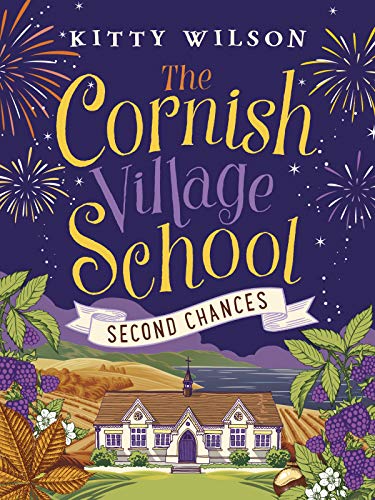 Sylvie Williams is the second woman in the Cornish village of Penmenna who discovers the possibility of romance in the beautiful setting. In this series of light and entertaining books around a small village school, some misunderstandings can slow things down, but the wonderful characters are funny and entertaining even though there are some interesting situations going on behind the story. Not that this book needs any former knowledge of the series; it would work well as a standalone book with mainly attractive characters. Marion, genuinely terrifying and impressive, effective head of the school governors as well as PTA leader is on form in this book. In fact one of the characters describes her as being more frightening than those he has encountered in his professional career – as a tv war correspondent. When Alex arrives in the village he has a past, and a small, lively and precocious daughter Ellie who has changed his life, but what he finds on a visit may change his life even more.

The book opens with a young woman and her small son arriving at the beach which is nearest to Penmenna. Sylvie Williams and Sam have been living with her Uncle Tom on the family farm where she nursed her late mother. She is feeling that she must move out, but needs to support her son as he starts at the village school. When they arrive at their favourite spot they find Alex and his daughter Ellie there, and the children strike up an instant and strong friendship. While Sylvie finds Alex very attractive, she believes him to be a temporary visitor, and does not realise he is a well known tv journalist. Alex knows some people in the village from University and school days and is staying with the wealthy Chase. The group of friends, including Rosy, headteacher of the school, persuade him to stay in the village as it will give Ellie some stability. When Alex brings Ellie to school and Sylvie discovers that he is to be a permanent resident, she realises that being attracted to Alex can only be a distraction to her need to leave the farm and find paid work in the village. Meanwhile Alex has huge plans to create a charity to assist the children of South Sudan that are the victims of war and other challenges. Unfortunately Marian also has plans for Alex, and they definitely do not involve Sylvie.

This is an enjoyable book which is an easy read on its own, though it makes reference to some characters who featured in the earlier book. The setting is lovely, including the small school, the teachers and children, and a small community who are generally welcoming. It is in many ways a contemporary romance and a gentle read, though there are also many points of attitudes that could be challenged. It is a funny book, with some points of panic. Sylvie has to face some challenges as she has moved on from her dedication to a career, and knows that she must find a new home in a village which is an expensive holiday destination. This is a light read which makes a pleasing alternative to heavier works, and I recommend it on that basis.

This is the second book I have reviewed in this series, and it is a very different read from yesterday’s Sexton Blake! I always have various books to choose from so a variety of reviews are bound to result. This book was a light read and very entertaining, a good distraction with a ‘safe’ storyline. The characters are really memorable, including the marvellous Marion…