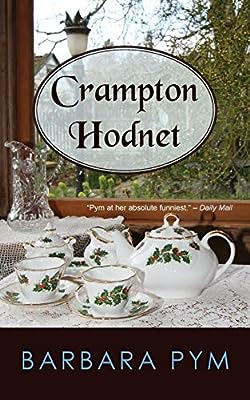 This is a book which was missed out during the author’s lifetime, but turns out to be wickedly funny. Some characters push the limits of what is expected of them, others despair that life in North Oxford is merely repeating the tea parties and relationships of every year, but what amused me about this book is that “Crampton Hodnet” is actually an imaginary parish. Miss Morrow is the quiet companion of the demanding Miss Doggett, but in her thoughtful way she sees far more than most what is actually going on in the community. An illicit relationship is described, with amused tolerance. Petty jealousies, gossip in the library and of course a confused clergyman dominate this comedy of manners and more as Pym delights with her humorous insights, sometimes sharp but never hurtful. This is a book which reveals in its settings of faded chintz, “dark Oxford dining -rooms” and wet Sunday afternoons, of discoveries in the British Museum, and disturbing things happening in Paris. I thoroughly enjoyed this book with its observations of life and love in an Oxford suburb where “The pattern never varied”.

The book opens with Miss Morrow quietly listening to the radio, the dubious Radio Luxembourg, in the dining room below the room where her employer Miss Doggett is resting in preparation for the tea party which is to come, to which various male undergraduates are invited. Miss Doggett is an avid collector of a certain sort of student, who are impressed by her collection of artistic treasures and who feast on the specific sorts of buns which her oppressed companion Miss Morrow must buy.

Further excitement is guaranteed when the two women go to Miss Doggett’s nephew’s house, as Francis’s daughter Anthea is discovered in a flirtation with the eligible Simon. Further the vicar and his wife bring news of a curate who is shortly to arrive in the parish, a Mr Latimer, who will be seeking accommodation. As with other ladies in Pym’s novels, a curate is greatly prized, even when he gets involved in a tangled web with an imaginary evensong. Meanwhile, Francis Cleveland is a lecturer and tutors a beautiful student, Barbara Bird, and begins to create a fantasy of a life unlived, of a racy affair, of romantic reputations. Barbara dreams of a spiritual relationship, of life on a higher plain, but is not of the passionate disposition that would go with a great love.

This is a book of disappointments, but also of wicked enjoyment of gossip and speculation. It is perhaps not the sophisticated plot or delicate humour of her better known books, but it reflects an earnest attempt to try out the humour of characters who are funny without intention, such as Mr Latimer and his innocent speculation on the need for a wife without passion. Some characters are destined to reappear in later novels under their names here or other guises; certainly the spinster’s obsession with younger curates is a theme, as is the practical wife who knows her husband’s weakness all too well. I am not sure why this book was not published during Pym’s lifetime, whether she felt it was not satisfactory, an exercise in character creation and humour that she would later mine for ideas, or whether the onset of war and war work pushed it out of realistic publication. I enjoyed it, and found it genuinely funny and entertaining with some memorable characters.

I am fast “running out” of Pyms to read and review, but will try to find a few more second hand copies of the more obscure books – I will not be tackling the obviously sad books. She is a uniquely comic writer, though I will be looking for someone else who takes quite a light look at life. Maybe D.E. Stevenson? I have “Miss Buncle’s Book” as well as some books from other publishers….Any thoughts?