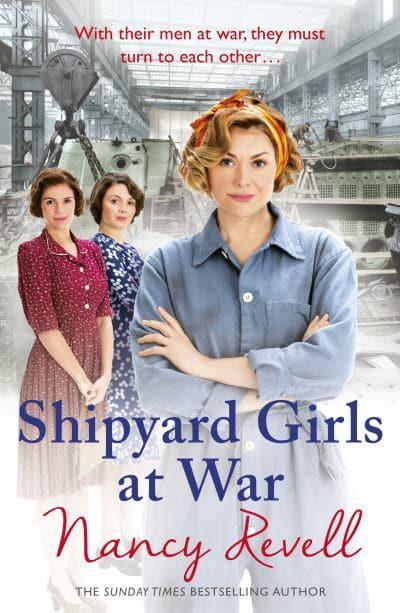 There are many books with the word “Girls” in the title, most of which tell tales of a group of women who joined together to work on the Home Front during the Second World War. This particular saga or novel tells the stories of a group of women, and some of the families, who worked at the shipyards of Sunderland. With air raids on the town and some of the local men joining the army, there would be casualties at home and away. This is a book which takes a fictional look at the difficulties of the work at the yard, being heavy and exposed to the elements. While women did the work, not all of them could physically keep up with the heavy tools and processes. It is the second one in a series, but there is enough in the book to allow the reader to pick up what has occurred before. Rosie is the gang leader, and has a secret double life and a tragic past.  Gloria is a woman who has secrets and challenges that are not confined to wartime pressures. A particular family group is coping with a loss as a soldier is killed in action. The survival of his brother causes problems and at least one household must come to terms with the future. This is a well written book of people who are living in difficult times, and making a difference, not just girls, but determined women.

Bel is a young women who was married to Teddy, one of the twin sons of Agnes, but she has heard that he has been killed, leaving her a widow with a small daughter. Joe, his surviving brother, is returning injured and will need tending. Bel grew up with Agnes and her family, and still lives in the family home. When Bel’s mother turns up memories are reawakened of her poor treatment of Bel as a child, how she was virtually abandoned and was brought in by Polly, Agnes’ daughter. Polly continues working at the Yard, worrying about her fiance Tommy away in the army. Her workmates are led by Rosie, who has secrets of her own, as she copes with her dubious job as well as the problems of progress at the Yard. She has a particular battle with Helen who is acting manager. She is especially concerned for Hannah, who is struggling to keep up with the work. Meanwhile, Gloria is worried by the problem of her estranged husband and his tendency to violence. Many problems present themselves to the characters, in addition to the dangers of air raids and the actual fighting of a war.

This book tackles head on some problems that were paramount at the time and continue to this day. Domestic violence and the lack of resolution from the law at the time is a significant issue. The question of love after bereavement is a difficulty in many ways. The whole book looks at the way that a community must continue when many men are away, and the need for ships to continue the fight. This is a very readable book which makes the most difficult subjects human, the extra difficulties of the times seen through the eyes of women who are determined to stick together. It has much to say about how physically demanding the work at the shipyards was, and how so many people were determined to fight in any way they could. Not all the characters act in a positive way, or have positive motives for their behaviour, and it is a realistic picture of family and community life. I will definitely look to read other books in this series, and recommend this wartime saga for its appreciation of place and people.

Yes, I am continuing with the theme of women in mid twentieth century Britain, facing lots of problems with life with many men serving in the military forces and finding a way to keep society going, as they had during the First World War. Have you a favourite book set in the time? Do you enjoy these saga type books?