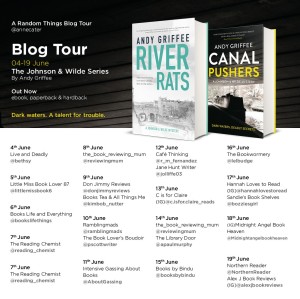 Living on a narrowboat on the outskirts of the lovely city of Bath sounds an idyllic life for Jack Johnson after the excitement of the encounters with dangerous people in the first book of the series of Johnson and Wilde mysteries. This book would be a good stand alone read, as the characters of Jack, his friend Nina and Eddie the little dog are swiftly described and made very real. Once again Jack and Nina find themselves in trouble, as life on the canals is seldom boring when they allow their curiosity to take over. This adventure, like the first, involves a lot of canal side action, although not so much travelling up and down the canals of Britain. Jack uses his journalistic experience to ask the questions, Nina’s bravery and resourcefulness is called on again, and Eddie is a useful foil to keep the story moving. New characters and situations emerge which keep the action lively, as a murder and threats of violence mean that Jack and Nina’s settled lives are overturned. This is another lively and absorbing novel which keeps the pace up and is a really good mystery or thriller. I was really pleased  to have the opportunity to read and review this excellent book.

As the book begins there is a death. A wealthy man is attacked leaving Bath’s Pump Room late at night, but this is not an ordinary mugging. As he is knocked unconscious and pushed into the river, there is the sense that he was targeted. Jack meanwhile is paying his regular visit to the laundrette in preparation for Nina’s regular visit at the weekend. He meets two small children and their mother, but the latter, Linda, is aggressively suspicious of him. Jack’s narrow boat, the Jumping Jack Flash, is once more a cosy home for him at a permanent mooring at the bottom of a friend’s garden. He has also got a part time job as a sub editor on the Chronicle,  a local paper. He discovers that the murdered man was a Mr Rufus Powell, and Ben, the editor, is keen to feature the links with The Canal Pusher which was the subject of Jack’s well received book. Jack later encounters some more people who have permanent moorings on the canal, but they have been offered substantial sums of money to give up their rights. Linda and her children have a boat there, as does an elderly professor who has a beautiful boat filled with his collection of books and other treasures. As the little community decides they wish to stay put, there is a suggestion that pressure is being applied by a company who wish to develop the adjoining site. As Jack and Nina investigate, they discover a complex set up which involves planning permissions and a Hells Angels chapter, newspaper editors and a friendly actor. As the excitement mounts, Jack and Nina rediscover the dangers of life on the canal.

This is a lively and entertaining novel of contemporary issues and the particular problems of historic cities like Bath in terms of environmental concerns. I especially enjoyed the characters who feature in this novel; apart from Nina and Jack the professor and Rani are fascinating, and Will is a lovely returning character. The tension is well set up and maintained, and there are elements of thriller in the later part of the book. I recommend this book to anyone who enjoys a contemporary novel featuring some fascinating characters and an entertaining plot.

Having read and reviewed the first two books in this series, I would love to read others. The canal setting is really well drawn and the characters are really attractive. There is a hint of an Oxford link?