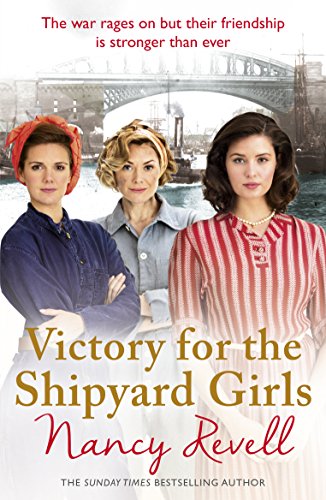 Victory for the Shipyard Girls by Nancy Revell

This further volume in the Shipyard Girls series featuring women who worked in the shipyards of Sunderland and their friends and families during the Second World War is mainly set in 1942. There are revelations of the women’s lives and loves centred around an area of intense industry, which also provides a target for frequent bombing raids. This is a book of intense emotions as the women’s experiences overlap and centre on the works, especially as Helen, the owner of the shipyard’s granddaughter is working as the manager. As with other series of sagas this book carries the story onwards, but this novel has its own plot, as the characters journey through several months of wartime experience. It also refers back to events that occurred a few decades before, as one character remembers a life changing series of experiences. There is tension as secrets are kept, but also hope in the form of children who symbolise the future as well as the past. Those who are keen to discover what has happened to their favourite characters will find much to interest them in this book, but it also works as a snapshot of the wartime experience of women.

The book opens with a wedding, as Rosie finally overcomes her reservations and commits herself to Peter. Not that it is an easy situation; a decision he has made means that he will be absent for much of the novel. Still, there are memories made and a new start for both, which will have an effect on others known to them. Bel is now happily married, but is seized by the urge to discover from Pearl the identity and fate of her father, something which Pearl is intent on avoiding at all costs. Gloria is settling into her role as a mother once more, but without her lover she struggles, concerned not only for her own child but also Helen, who she has begun to see in a more sympathetic light. There is  a grievous threat made to many of the group of friends by an embittered woman, a revelation of family secrets that would hurt several people. Gloria and Rosie choose to act to limit the potential threat, but the machinations of Miriam will still affect more than one life. The bounds of friendship will continue to support the women who live through this difficult time but every relationship is severely tested.

This book, like the others in the series, is easy to become engrossed in as the situations of so many overlap and also move in parallel. This is a skilfully written novel which features many concerns of the time which went beyond Sunderland, as the fate of nations was still hanging in the balance. Revell’s usual high standard of characterisation is well demonstrated in this book, as well as her gentle development of plot. The sense of time and place also emerges so well from this book, as everyone feels that they must contribute to the war effort, either on the front line, the building and repairing of ships of war, or the taking care of children to allow others to work. I found this a fascinating book, and am keen to read more in this series.

I am taking Saturday and Sunday off from posting again this week, but I will be gathering my forces for the following weekends. Reviewing a book a day does mean reading many books, which can be easy in many ways – but I do get distracted. I have even started watching “The Crown” again – and once again been impressed by the acting of the leads. I have nearly finished Downton Abbey again, an as for Poldark… Have you been distracted by any classic series?