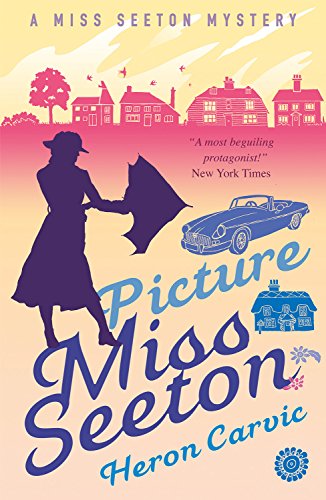 The first of the ‘proper’ Miss Seeton books, this novel introduces various characters, mainly of course the brave and indomitable Miss Seeton herself, who sometimes does not appreciate what is really going on. Beginning with her getting embroiled in a Carmen – like murder with her trusty umbrella, Miss Seeton soon discovers that notoriety and threats can seriously inconvenience her. This book was originally published in 1968 by the first author, and is now republished by Farrago. Miss Seeton in this book is a retired teacher who has just inherited a cottage in an English village from her godmother, but soon comes to the notice of the police when she is an accidental witness to a vicious murder. As in the prequel which was written more recently, she has a talent for drawing images of people and situations which reveal much more than their outward appearance; their motives and real personality are strongly suggested for interpretation.  Superintendent Delphick, otherwise known as the Oracle, soon discovers that it is possible to find out a lot from the drawings when looking for murders and other problematic individuals. This book introduces some splendid characters in the village, and there are plenty of jokes and witty asides in a story that combines real wit with some interesting observations on the time.

The book opens with Miss Seeton walking through the streets of London with her trusty umbrella when she sees an altercation between what looks like a young couple. Having intervened, she lands on the floor, but worse is to come when she discovers that the young woman has been stabbed. When questioned by Delphick and Sergeant Ranger, the Superintendent  hits on the idea that she could draw her impression of the attacker, and he is able to identify the attacker as the notorious Cesar Lebel. He realises that Miss Seeton is a valuable witness, but that if she is identified and her whereabouts become public knowledge, she may well be in danger.

When she moves down to the village of Plummergen she discovers a community partly fuelled by gossip, but also made up of an unusual mixture of people. There is a couple who look after the house and chickens, who become quite strong in her defence when needed. Two women are advanced gossips, while there is a village shop that provides a source of interest. A writer of children’s books is in residence, with a daughter who is proving more than slightly difficult. The vicar is beyond vague, with a more organised sister.  My favourites are Sir George and Lady Colveden and their son Nigel, as they both quietly do good without fuss, while Nigel is sweetly determined to help his childhood friend. When she says in frustration that she could kill him, Sir George replies “Stupid…Wife always first suspect. Hire someone. Don’t let ‘em overcharge”.

This is a book of slightly ridiculous events, wonderful characters and at the centre, the accidentally brilliant Miss Seeton. Her strange drawings provide the trigger for detection, her insights provoke investigations, but most importantly her dauntless bravery makes all the difference in this story of criminal goings on and life in the country side. Apparently there are at least twenty more Miss Seetons to come – I look forward to reading more as soon as possible.

I am just about getting used to not writing (and publicising) a review for Saturday and Sunday – which worked out well as Daughter was involved in a car accident on Friday. She is okish now, but her car was most definitely not. Not her fault by the way! On a more cheery note next Sunday I am due to post another book in a English town murder mystery series, so maybe a theme is developing on this blog?