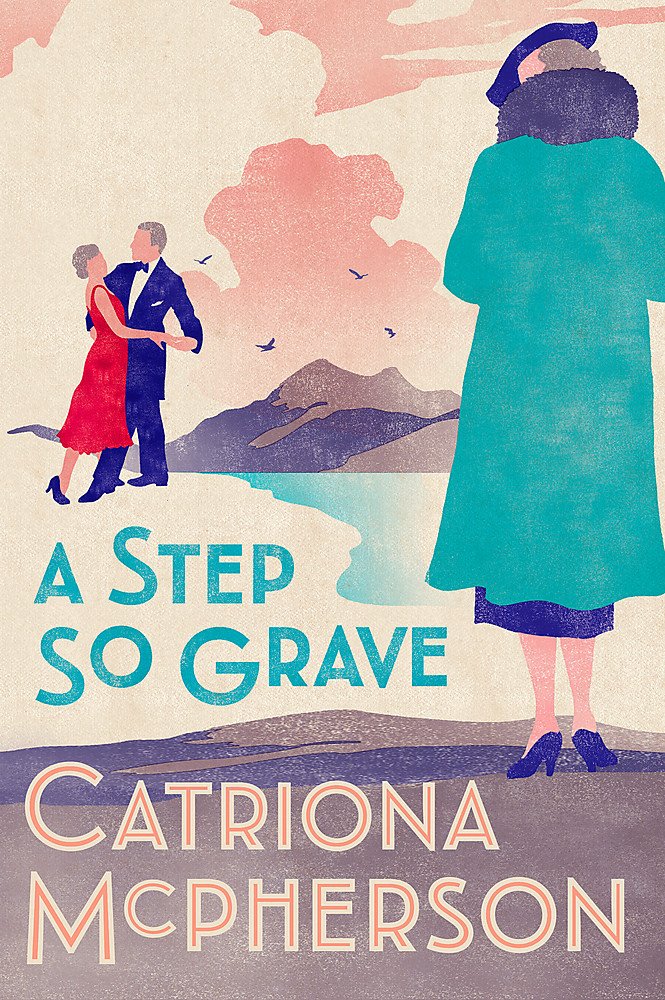 A Step So Grave by Catriona McPherson

Family matters dominate this book in the series of Dandy Gilver investigations. Those who know and enjoy this series will remember the insights it offers into Scottish life in the early half of the twentieth century, as well the narration of the story by the highly individual Dandy Gilver who enjoys her work as a private detective together with her partner, Alec Osbourne. In this novel, which can definitely be read as a stand alone book, family matters prevail for Dandy, as she visits the home of her eldest son, Donald’s, intended bride. Many of the novels in this series are located in very specific places, such as a department store, a city house or a dance hall. This novel is set in a house, a village in the farthest reaches of Scotland, an obscure and distant place dominated by Lady Lavinia, the matriarch of a small community. Not that Dandy is happy with the proposed match, and the more she finds out about the appallingly named “Lady Love” the more concerned she becomes about the situation of a matriarch who dominates the oddly assorted family. This is a cleverly plotted story of a murder in a family home, specfically a rose garden, which is full of folklore, superstition and the Gaelic language. As Dandy and Alec investigate, the research in this novel propels a story which is sometimes funny, always fascinating, and deeply enjoyable.

Dandy’s introduction to Applecross is not favourable as her family travels across the sea and completes the journey to the house in the arms of fishermen. Dandy immediately forms a concerned impression of a family with many secrets, especially when she discovers not only that Mallory, Donald’s chosen, is several years older than he is, and that also he seems fixated on her mother. Indeed, everyone speaks of her generosity, her determination to improve the community, and her talent with flowers and the memorable knot garden which is her obsession. Her husband, Lachlan, still bears the scars he suffered in the War when trying to save the life of a young man from the village. Also present is a couple who have long been friends of Lady L, whose son has indeed married the younger daughter of the house, Cherry. Dandy, Hugh and their younger son Teddy all feel distinctly uncomfortable with the establishment despite the universal supposed love for her ladyship. When a scandal emerges on the morning of the birthday celebrations, they are urged to return home until matters are sorted out. It is only when they have braved the journey homewards that they discover that Lady L has been found murdered in her beloved garden. Their dismay is only increased when it seems as if the matter has been hushed up with an unlikely tale of a tramp who happened to be in the isolated area, and the whole situation needs to be further investigated before an engagement can be confirmed.

This novel works so well because of the character of Dandy and how she narrates the story, her surprise at various elements of the establishment, and her disgust at such things as the over the top decoration of the house and the physical labour undertaken by Cherry. The humour is expressed in such things as her descriptions of her husband Hugh, and the machinations of her maid Grant, who supplies a most unsuitable dress for an active detective. This book engages extremely well with the times in which it is set, as one War is in the recent past and another political upheaval seems highly probable. The research into the setting is impeccable, but lightly worn in such things as the phonetic descriptions of Gaelic phrases. As always I recommend McPherson’s books whole heartedly, and suggest that those who enjoy well plotted historical murder mysteries seek them out.

I remarked to a friend recently that with so many novels available featuring women detectives in the 1920s and 1930s they must have been bumping into one another trying to solve every murder in Britain. I can immediately think of Maisie Dobbs and Kate Shackleton, as well as Daisy Dalrymple. My friend suggested that they didn’t have much else to do.  I enjoy reading all of these series, though I do particularly enjoy the sense of humour in the Dandy books. Have you read all of these series? Any thoughts?