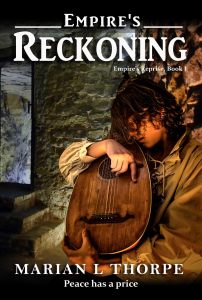 A group of countries on the edge of history, this is the story of a new arrangement, a new agreement between states that border each other, overlap and have to find a way to work together. A story which started in the Empire Legacy trilogy, this is a historical fantasy which looks at  a group of people at the heart of a political situation. It features Cillian, unwilling politician, linguist and thinker, his wife Lena, warrior, who narrated the original novels, and, Sorley, a musician who has taken over the narration. In this book he narrates the story of his experiences with the couple, as well as Druisius or Druise his companion, bodyguard and lover in two time lines, fourteen years apart.  It makes for a complex book, but the element that holds it together is the people, four people who appear in both timelines, strong characters that affect all they meet. Sorley is a vivid narrator, expressing his feelings, often of regret, but also hurt,desire and helplessness. This brilliantly paced book has so much momentum that it is a compelling read. Difficult to categorise, this is such a fascinating book that I was so pleased to have the opportunity to read and review it.

Sorley is a very involved narrator, who has witnessed and been an important part of the lives of the other three people. The book opens with the situation in the later period, as Cillian and Lena lead a community where there are several students studying various topics as part of a new arrangement of countries. Included in the students are Lena and Cillian’s two children, ten year old Colm and fourteen year old Gwenna, the latter appearing in both timelines as an important person in her own right. The rules concerning the community are strict regarding the expression of affection even between married couples, and Cillian’s relationship with Sorley is complex. Lena is still the tough, fierce defender of those she loves. Sorley is about to leave for his homeland, and it is the subject for debate about who is to go with him. Gwenna is already a political figure as her father is of the Emperor’s family, she is officially a princess. Aware of the tensions surrounding her, she complains “Why are there so many secrets in this family?” As the politics of several countries are still complex, fourteen years on from an uneasy settlement, Sorley’s narration returns to that difficult period when the treaties were signed, and Cillian is still recovering from the severe injuries he suffered in a battle. There was confusion about where true loyalties lay, the loves that existed which could not be easily expressed, and the natural concern of a teenager questioning everything about her life and the lives of those around her.

While it is difficult to describe what makes this such a good read, the momentum that draws the reader in, the real insight into the people involved. It is not necessary to have read the books that go before, but they will be irresistible when you have read this wonderful blend of life, love and more in a detailed setting of countryside, farms and fortifications. Sorley’s tale strikes at the heart of his identity and the actions of those around them, and a vivid deeply felt book is the result. I recommend it.