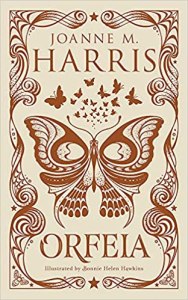 Beauty, dreams and memories are only some of the themes of this amazing book. It is beautiful in so many ways, the embossed cover, the illustrations and high production values make this a glorious object. The writing is also beautiful, full of dream sequences, fleeting impressions and descriptions that fill the pages with colourful images. At it heart is a desperate sadness that rings through the pages, a desperate longing for the return of a child who has died, a search beyond boundaries. This is a surreal book in some ways, dealing in riddles, suggestions and ideas which grow throughout the novel as the main character, Fay Orr, seeks desperately for her daughter, Daisy. The description of fantasy hardly does justice to a novel which is fantastic, but stays within logical bounds, as Fay goes on her unintentional journey. This novel is a stupendous achievement by an experienced author writing in her second identity, one which is heavily influenced by classical literature and in this case, folklore. It is an unusual book that empowers the imagination as this one does, makes music audible, colours glow and much more. I was so pleased to have the opportunity to read and review this book.

The book opens with a short story of the madcap Queen of May and her loss of a child, with the memorable statement “Grief, the wingless bird in its cage, singing and singing and singing”. Singing will prove to be a vital part of this book, not least because Fay is, or was, a singer. It then looks at the story of Daisy Orr, a daughter who becomes obsessive, and who dies. It goes on to assert “There should be a word…for a woman who loses a child.” , describing the overwhelming grief that Fay feels, having lost both her husband and child. She runs through London, and it is in the city that things change, that she begins to lose her sense of the normality of well known landmarks, and she sees things that should not be there. It is the beginning of a lyrically described adventure, full of descriptions of change, some movement, and a desperate series of circumstances which Fay must use all her resources to cope with in a totally involving way. A dream overlapped with half remembered songs, riddles and more. This is a story that works almost on the edge of consciousness, stretching the understanding, full of the power of imagination.

This is a difficult book to review in that it is difficult to adequately sum up its appeal. It is not the easiest read, having a unique and complex set of ideas and allusions but it is worth every element of effort. It looks at the extremes of grief and the vital importance of memories. I found that it is almost a painful read in its sophisticated views of the impact of grief, but its beauty is overwhelming and memorable in so many ways. It is a book to sink into, full of love and beauty, the language shimmering throughout this novella. It is a stunning fictional account of the power of love, and I recommend it to those with a taste for the beautifully unusual.

3 thoughts on “Orfeia by Joanne M. Harris – a beautiful fantasy of love and loss”