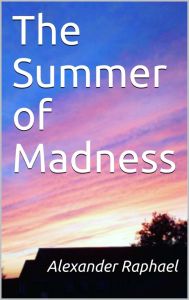 “1801 – I have just returned from a visit to my landlord – the solitary neighbour that I shall be troubled with… A perfect misanthropist’s heaven: and Mr. Heathcliff and I are such a suitable pair to divide the desolation between us.” These are some of the classic lines that are at the heart of this story, a sort of short tale of the summer of love. Royal weddings, romance and an increase in weddings are the stuff of a summer season in which people are doing romantic and frankly daft things and this “short story” captures some of the sense of desperate acts. For this extremely slim volume has quite a powerful image of a man who is willing to try anything. Alexander Raphael has skilfully caught something of a particular summer so well that it is almost possible to visualise the main scenes of this narrative.  A sort of romance, a sort of discussion of what lengths people will go to, and the effect of publicity on real lives is looked at in this well written story. I was pleased to have the opportunity to read and review this book.

The way that Heathcliff and others were summoned to help in a book form was because a woman got fed up with her relationship. After two years together, it appeared that she was fed up of him spending more time with his friends and video games than her, and accordingly leaves a farewell note on his gaming console. She tells him not to be in contact. However, Kurt Vannes refuses to take no for an answer, and he tries in every way to contact her. His voicemails, gifts and gestures are unsuccessful, even when he spends a lot of money. He accordingly hits on the idea of finding a public place to stand and read Wuthering Heights aloud. His appearance and normal shyness is memorable to those who gather around to hear his reading of his ex girlfriend’s favourite book. Some are curious, especially when he offers no immediate explanation of his actions. Some come because they love the book and want to hear it, and some come because they spot someone in the crowd they like the look of very much. As a reporter is attracted and the story spreads, will this unusual stunt have the desired effect?