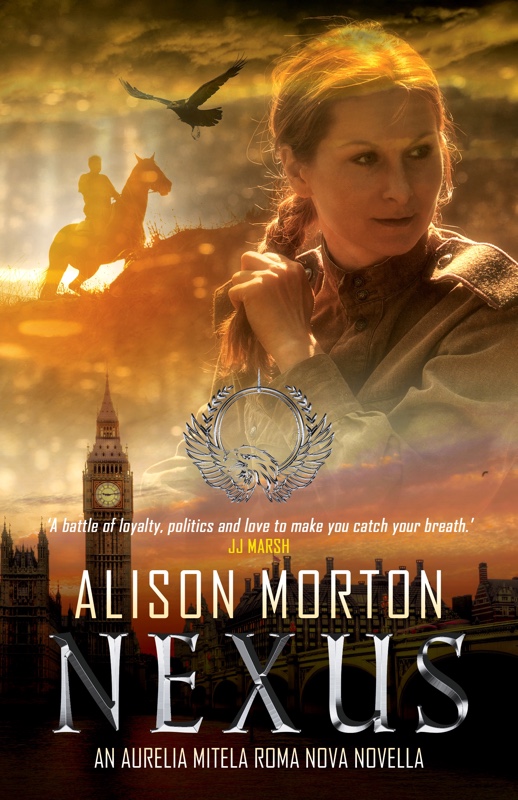 A thriller, set in an alternative Europe, featuring a ex-military officer determined to protect her family and friends, Nexus is a short but vivid episode in the Roma Nova series by Alison Morton. A standalone novella, this is a brilliant book which maintains a fast pace while keeping in touch with other Roma Nova stories. Aurelia Mitela has served her time in Special Forces, and can disarm a gunman with or without the help of her bodyguards. Her determination to help an old friend and desperate father is second only to her passion to protect her daughter and partner. From the flat lands of Cambridgeshire to the streets of Roma and beyond, this novel never pauses in its revelations of international crime and petty grudges. A terrifically physical book, this again contains a certain vulnerability on Aurelia’s part when not playing by the rules, but is also punctuated by her leaps of intuition when a threat is perceived. Morton’s creation of a state run by women from earliest times gives a sharp focus on the responsibilities that can be assumed when traditional expectations are overturned. While cleverly steeped in a world where Roman gods and army ranks are still common terms, the main characters are set in a 1970s Europe where London still stands but has the legation from a Roman state within its environs. As modern technology begins to emerge even if referred to by different names, this book is cleverly constructed and executed. It is an adventure that I was pleased to have the opportunity to read and review.

The book opens with a conversation between Aurelia and her friend Harry Carter. He is consulting her because his troubled son Tom has disappeared once more. As a widower, Harry has tried to bring up his son with every material advantage and ambition, but apart from a brief interlude when Aurela’s companion Miklos managed to gain the young man’s confidence with horses, Tom has seemed angry with his life. Aurelia is soon involved in her own offspring’s problems, as her daughter Marina is being bullied by another schoolchild. Her position is difficult as her military training and experience is unsettling in diplomatic circles, but it is not long before she must remember every survival skill she has ever learnt.

This book is an excellent episode in the Roma Nova series, fitting in between other novels and consistent in the massively able Aurelia from whose point of view this book is told. She is not a superhero, but a survivor in nearly impossible circumstances. This particular book offers an alternative view of Britain which has endured a different history; I was particularly drawn by the description of the Cambridge ara and “Oldmarket” instead of “Newmarket” and other little hints of the nature of a different European history. The importance of family, of love, is still central to this thriller- adventure, and I was instantly drawn back into the world of Aurelia and her state responsibilities. I recommend this book which is part of a series which has made room for fierce female protagonists, and it is as carefully and engagingly written  as its predecessors and no doubt successors, of which I hope there will be many!

Having finished my dissertation, we had a great evening with some of the other students on the course, when much food was eaten and a little drink taken (not that much – several drivers present!). Here’s hoping all of our marks reflect the efforts we have put in!

Adventure, danger and crime, a historical and fantasy state, all led by a resourceful and determined woman make this a terrific read. Subtly creating a female led country set in a twentieth century Europe that has endured just one Great War, the details of daily life are fascinating and well thought though by the author. This book is part of a series set in Roma Nova, where the royal family and inheritance runs through the females, though it is completely standalone in terms of character and plot. Elements of the characters run through the novels, and the mature and confident way in which the plot, characters and setting are handled make it a wonderful read. Fast paced and with plenty of twists, this book tells the story of Aurelia Mitela, a young woman who has served in the military, who has a young daughter, and is suddenly thrust into a world of diplomacy and espionage. To add to the tension, a long term and cunning enemy is determined to attack Aurelia in any way possible. This is a thoroughly enjoyable novel and I was so pleased to have the opportunity to read and review this excellent book.

The book begins with a section called “Duty”, as Aurelia gets ready to go on a military manoeuvre on the borders of the independent state of Roma Nova. Despite or perhaps of her extreme closeness to the ruler of the state, Imperatrix Justina, she is horrified that her mother and daughter are in the company of Caius Tellus, a distant relative who has always been jealous of Aurelia as he has lived a life of a gambler and waster. Nevertheless she departs for the border, in bitter weather, with her unit, and almost immediately there is an attack. She is wounded, but fights on as some of her fellow soldiers are in danger. She is dramatically called back as there is a family crisis, and she soon finds herself immersed in the daily running of the family estate and business interests. As she collapses from her obsessive dedication to the work she is given orders to go the Germanic state, where she discovers that being a delegate with a royal connection gets her a lot of attention and not all of it pleasant. Her liberty is put in doubt, as she has to make every effort to survive on any terms. It is fortunate that she is skilled in self defence and extremely quick witted, as it seems that everything is against her returning home to her little girl. As she seizes the chance to find some affection or even love, she is placed in an impossible position. With a determined man targeting her, can she fight her way through?

This is definitely a novel for those who enjoy action and a fast paced read. Yet also admirable are the small details, the young men who are the typists, the realisation that in this historically based fantasy women are truly in control, without necessarily dismissing all men as worthless. Morton has again succeeded in creating a world that makes perfect sense, with rules and laws that are logical, that feature the frustrations and other emotions that are familiar, and gives a new perspective on the abilities of women. Aurelia is a wonderful character, tough and forthright, quick and realistic. I recommend this powerful novel which maintains a strong pace throughout and has so many twists and turns, surprises and incidents that I struggled to put it down.

Today we attended several events at the Derby Book festival, all of which were very enjoyable, and in the case of the session on “Refugee Tales”from those who seek to support those detained at Gatwick airport, extremely moving. I hope to post more about these books soon,after I have completed my conference!

Tough, articulate and determined; human, bewildered and sometimes anxious; Carina Mitelia is a present day hero in an alternative setting. Creating a slightly different world is one thing, staying very firmly this side of fantasy is another achievement. As Karen Brown becomes Carina Mitela, she slips from being advertising executive and volunteer park ranger into a fighter who must survive in her new role, new identity and new country. Full of physical action and subtle cultural hints, this is a novel which creates a new world order in which women rule and have to fix situations, while watching their backs for political tricks. A fascinating tale of the Roman way of life recreated for the twenty first century, this is an adventurously plotted novel in which there are mobile phones and sophisticated surveillance methods, yet the language is Latin. Self confessed “Roman nut” Alison Morton has created this novel as part of a series which pushes the boundaries of expectation, but which essentially revolves around a battle for survival. I soon became immersed in the world of Roma Nova, and I was grateful to be sent a copy of this novel to read and review, the first in the series.

Karen Brown leads a life in New York which is filled partly by her volunteer role as a patrol officer in Kew Park. When she defends an elderly man, an Indigenous, from some teenagers by some clever manoeuvres, she finds herself in trouble. As she briefly mentions in her narrative an alternative history of the United States in which the War of Independence did not happen and the British only left in 1867, the reader begins to appreciate that the subtle differences  in the world order means that the orphaned young woman has a link with Roma Nova. This is a state which is made up of the ruling party of the original Roman Empire, which has survived over many centuries to retain their power via women, who are the hereditary rulers of the successful and now peaceful country. Karen is contacted by Conrad who explains that she has family links in the country, and so begins a tense period where the diplomatic and legal possibilities run alongside brutal attempts on her life. As she battles to survive, she discovers that choices are forced upon her which will mean that she accepts a whole new identity, but that she must still be on guard, and indeed take the offensive if she is to fulfil her new role.

This book for me represents the best sort of fantasy, near enough to real life to be understandable, but offering a new element of a world view to expand and allow new adventures. There is a fair amount of physical violence, and there are times when I wondered if Karen/Carina has nine lives, as she is forced to do battle to survive so many times. This is a firmly female led thriller, and though Karen is more of a victim having to be rescued to begin with, as the book proceeds she becomes her true self as she takes control. A fighter in all senses, the Carina Mitela novels and indeed their predecessors, The Aurelia Mitela adventures, feature strong women in familiar yet challenging circumstances, and I would love to read more of them.

This book features the main protagonist learning Latin as a contemporary language, which reminds me of my couple of attempts to at least learn enough to translate the words of choral pieces and similar texts. Maybe when I have written a paper for a conference and submitted a dissertation and such like, I could think of having another go!