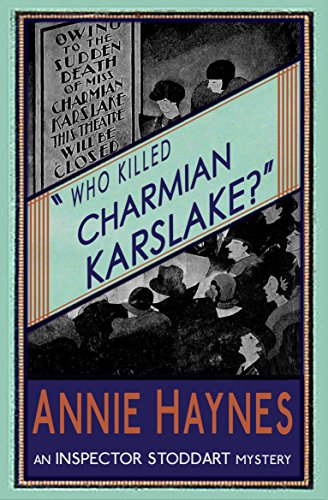 Another Dean Street Press find, reprinted as a classic murder mystery. I was glad to get a review copy of this model murder mystery, with all the great ingredients; a great house, a murder, a house party and observant servants. Add in a local investigation in a village full of vividly described characters, the glamour of theatrical life, all investigated by some solid, reliable types, and all the classic crime boxes are truly ticked.

The book starts with a ball at a country house. The family are naturally present at a dance in honour of a younger brother’s marriage, and as Sir Arthur Penn-Moreton observes, the aftermath is a “beastly mess”. Just how messy soon emerges as the body of Charmain Karslake is discovered in her room, an American actress who accepted an invitation much to everyone’s surprise as she had no apparent links to the house or the surrounding village. The investigations of Inspector Stoddart and his trusty deputy, Harbord, range throughout the perfect village in the shadow of the great house, yet also take them to London and some well worded advertisements. Haynes acknowledges some real life crimes as the trusty pair track down the deceptions and hidden identities involved in this solid stories.

This 1929 novel appears as one of Haynes later mystery novels, and it is an assured performance that probably inspired many other authors in the Detection club which was formed shortly after her death. She manages to combine all the elements of this Golden Age mystery with some very well delineated characters, ranging from the village sweet shop owner to a monocle wearing gentleman. The clues, including a cursed jewel, shoes and scraps of paper could have come out of the Cludeo set, yet Haynes invests them with solemn significance. I also liked her indignant American, who finds the slow proceedings of British justice frustrating and lets everyone know repeatedly.

Altogether this is a well written and consistent mystery, setting the bar high for all those mysteries which were to follow. Many motives and theories are aired by the detectives and others, many of which bear convincing arguments as solutions to this deviously plotted mystery. It represents a world that possibly never was, but it never allows nostalgia to overwhelm its characters, including a time worn actress, full of her deception that she is still a star. This novel was called in its first publication “an uncommonly well- told murder tale” and so it remains today, a classic crime in a memorable setting with some splendidly written characters.