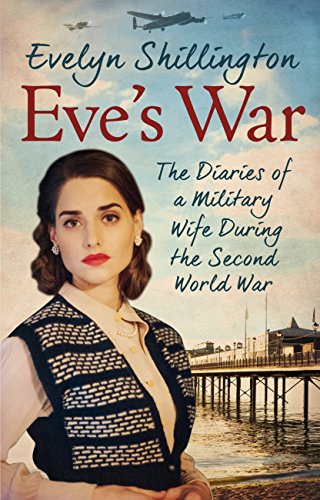 Diaries of real people have a certain appeal, and when those people live in interesting times they are fascinating. They have an immediacy that is valuable in many ways, an honesty without the benefit of hindsight and self editing. When they are well written as this volume they reveal a lot about the experience of the author and those they have contact with, people relevant to the overall story. This volume has been edited really well by the talented Barbara Fox, who has an excellent record of using people’s memories to construct a narrative. This book is the record of Evelyn, who is married to an army officer, from 1935 to 1946. She actually moves around a lot, in Britain until July 1946 when she arrives in Italy. It is the story of a woman who is deeply in love with her husband, and determined to follow him wherever he is stationed. She has the happy talent for making friends wherever she goes, despite frequent moves when her housing becomes unavailable or unsuitable. She is a meticulous diarist, writing about her feelings, the setting, her clothes and what else is going on. Not that she is self centred; she is a keen recorder of what is going on for herself and others in the context of what is happening with the war as well as locally.

When the diary begins Evelyn is in her early forties, and is happily married to Rex, a popular and effective army officer.  She is returning to Britain from Hong Kong where he has been stationed as the diary starts. Barbara has supplied a list of Evelyn’s most significant relatives, friends and acquaintances, which is useful as the friends in particular can only be mentioned briefly, or be a constant reference point. As the book begins Evelyn is grieving for her mother, a successful playwright, who has died while Evelyn has been abroad. Evelyn makes frequent reference to attending productions of the shows which have a popular appeal.

The diaries are valuable as a record of what happens as the peace breaks down in Europe and elsewhere. There are moments of hope as war seems to have been averted for a while, but then it becomes a reality. Evelyn is not ever in direct danger, which is fortunate as she evidently hates going into shelters. Rex has to work long and difficult hours ensuring supplies are being dispatched to the army units which need them, especially as the Normandy landings are in preparation. Evelyn is sometimes involved in the duties of being a senior officer’s wife, presenting prizes at games and other events. Not that it is always straightforward, as early in the diaries petty jealousies among the army wives make her life miserable. She also volunteers for the war effort in many ways, not limiting to herself to gentle tasks but such heavy tasks as cleaning guns for the Home Guard and sorting out vast amounts of clothes for those who have lost everything in bombed areas. She also sets up an advice centre, and is naturally irked when someone else takes the credit. She records holidays and dog walking, setting out the progress of the seasons in the plants, trees and gardens where she is living. Some places are better than others, where she has to eat the meals provided or cook whatever she can obtain in difficult conditions. When confronted with a personal maid in Italy she worries about underclothes that have been made to last. In the end of the book she is able to observe a war trial, and writes very movingly about the experience.

This is a lively and excellent read. Never dragging but always moving on, as it is well paced and interesting. These are deeply personal records, yet this book does not feel like prying or invasive notes of a sad woman, but instead the positive writings of love, involvement and interest. This is a really good read, fascinating to anyone with an interest in the Second World War Home Front, and the role of women who did not serve in the forces. I recommend it to the specialist and general reader as a well constructed book that deserves a wide audience.

This is the second book that I featured in my “Three for V.E” post last Friday, and was a really good read. The final one is Kate Atkinson’s “Transcription”, so i hope to read and review that over the next few days.

This is rather a special book, recording as it does the experience of one girl, one family, as they cope with unique circumstances. The fact that it is also a magical account of a childhood in a fairly idyllic setting is ironic, given the fact that it is wartime. With the benefit of hindsight we know that there was an end to the Second World War in which Britain itself was not invaded, and that though there were losses and tragedies both at home and abroad, most people survived. The evacuation of children for many must have seemed a great adventure; but for families spilt by such necessity there was confusion and pain. Not every child was greeted by those who were happy to give home to evacuees, and some hosts would choose children to set them to work. This book, written by the daughter of an evacuee, captures a time of mainly happiness, though shot through with the tragedies of several kinds.

Gwenda and Douglas are enjoying a happy and secure childhood in Newcastle with loving parents, family and friends. They know the neighbours, enjoy the company of a young maid, and special family times. The local area, including the parklands of Jesmond Dene, seem set up for the pleasure of a small girl as she recalls the Birdman, who feeds and knows the wild birds. All too soon war is declared, and although Gwenda is unsure what it will mean, she soon understands that food and other things will be in short supply. Moreover, she overhears that she and her elder brother are to be sent away, possibly even as far as Australia. Newcastle is not a safe place when German bombers seem to be expected, especially as there are docks and armament manufacturers close by to the house. So the children are sent away to the countryside, but it is not a happy placement. Illness and lack of care means that they are soon home once more. It is therefore with some trepidation that they are dispatched again, with firm instructions not to be parted. Eventually they are accepted by a kind couple who happen to be the local schoolmaster and wife, who are initially unsure if they can cope with a six year old girl, as they have older sons. Instead it turns out to be an entirely happy arrangement, with affection and friendship on both sides while Gwenda learns the harder realities of country life. There is sadness as not everyone returns to the village when illness strikes. Gwenda’s father joins the army, and the difficulties of war time travel means that the children rarely see their parents. There is a number of very funny incidents, such as when Gwenda travels on the bus with a necessary bucket, and she decides to bring a lamb home.

This is a book of vivid memories and well arranged stories. The narrative is linear and so well controlled. While there are many accounts of life on the Homefront available, both factual and fictional, this is exceptional simply because it represents the accurate memories of a curious and bright child. The writing is so good because it represents tales told to a daughter who has taken them and made them into a very readable account. It is perhaps too positive, as the bombs that fell on Newcastle seem to have avoided anyone known to the family, and the deaths that do occur are tragedies for others. Despite this, this is a very readable book which I really enjoyed, and recommend as a fascinating account for everyone interested in the wartime experience from a child’s point of view.

This is a charming book, written with real love and insight into a child’s mind. while I have been struggling to finish many books recently compared with last month, this was not difficult to read. I have a large essay to write for University soon, so there may be fewer posts, but I will be reviewing another super book soon; “The King’s Witch”by Tracy Borman.

Just a quick note about a book which I managed to read while minding a marquee in the pouring rain. The Festival has now finished, in a day of heavy rain and too few visitors. Oh, and thunder and lightning. Still, I did finish some books which I’ll mention here.

Today’s book is Sand in my Shoes by Joan Rice.

It’s a jolly book in many ways, suitable to while away a (literally) rainy afternoon, but not in any way great literature.It is a diary of the war time progress of a WAAF officer. It starts in civilian life, follows her training as a photographic surveillance interpreter, and her journey on board a ship as part of a convoy. It is in the form of a diary, which is repetitive, with gaps and a frustrating lack of detail. She describes many flirtations with pilots and other officers, but does not really reveal her thoughts and feelings in anything like enough detail. It almost seems to be written in note form. I could almost wish that someone had used the material to write a proper account, or a novel, which would give the account balance. Instead I learnt more about scrounging furniture than what it was really like to experience that time as a young woman.

I enjoy reading diaries as much as anyone (probably) but this was not a brilliant example. I’m looking forward to reading a friend’s book far more: Bedpans and Bobby Socks by Barbara Fox and Gwenda Gofton.

It does seem that this account of a journey across America is much better written. I look forward to enjoying this book – hopefully in the dry…