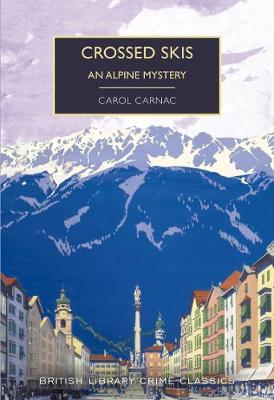 A mystery which features skiing in Austria as well as a London fog, this superb 1952 novel, now republished in the British Library Crime Classics Series, has all the ingredients for a classic read. Written under one of the pen names of Edith Caroline Rivett, (the other being ECR Lorac) this experienced and skilful writer holds two storylines in parallel for much of the novel extremely well. One story is of a party of skiers of mixed ability, eight women and eight men, who make their way to a ski resort in Austria. The other is the death by fire in a boarding house in London which excites the suspicions of Carnac’s usual lead detective, Scotland Yard man, Julian Rivers. In his usual excellent introduction, Martin Edwards draws attention to the different identities of the writer, her inspiration for this novel, and the clever way in which she structures this book. There is much to admire in this novel, in terms of detailed knowledge of the trip, the currency rules and the entire atmosphere of post war Austria. The dialogue is as well written as the setting, and one of the characters in the party almost becomes a detective of strange events. Not being someone with first hand experience of skiing I can only suppose that the accuracy of the runs, classes and challenges are as well written as every other element of this extremely enjoyable book.

The book begins with an account of the departure of the party from Victoria station. There is all the confusion of tickets, different classes of travel, picnic food and the distribution of sleeping berths to contend with as well as the last minute confusion of delayed trains. Two elements are worthy of note at this stage, the general appreciation of the difference in atmosphere as soon as the channel is crossed as the rules of rationing are forgotten; the second is the way that the party is not known to each other as several of the original men dropped out and others were substituted at the last moment. The journey is not without incident or revelation of character as the men argue and bicker, the suggestion is made that it is possible to create a  personal history when it is not easy to check the truth.

Meanwhile in London an older woman is horrified to find that her house is on fire, and her son is not telling the truth of what he saw. When Rivers and his assistant Lancing get involved at the discovery of a man’s body in the house, certain elements make them sure that this is not an accident, and there is a connection to other crimes. In a long string of clues and investigations, Rivers and Lancing begin to suspect that skiing is connected, and their ambitions to visit the slopes in the pursuit of the guilty may not be impossible.

This is a very readable book which is well paced and plotted, and the characters are well drawn and realistic. Altogether it is a fine example of a classic crime story which deserves a wide audience as a true gem of the Golden Age of detection written by a skilled hand.