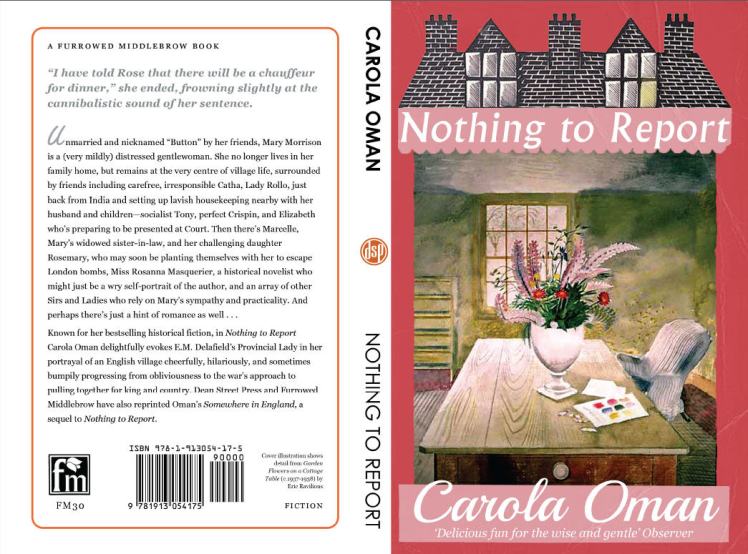 A woman prepares for war. Except that there is far more going on than war preparation going on in this book originally published in 1940, now republished by Furrowed Middlebrow at Dean Street Press. This is the story of Mary Morrison, an older single woman who lives in a converted school on the edge of her family’s old large house and estate. Willows, her cottage, is an important part of the book, as the focus of many of Mary’s thoughts. She lives a busy life, dealing with her godchildren and younger relatives, providing a buffer zone between them and their distracted parents. She deals with friends and various relatives, old friends whose lives have moved on or stagnated.

As war approaches Mary is brushing up her nursing experience and her running of various organisations for young women. There are set pieces, such as tennis parties, Ascot and other events, and the clothes are carefully described as well as the minor crisis which affects the main participants. There are some fascinating characters including Catha, Lady Rollo, and her bright daughter Elizabeth, socialist Tony and Rosemary, actress. Mary plans everything carefully, writes things down on her “engagement block”, works out her clothes and her travel arrangements. She is good in a crisis, finding a suitable gown for her imperious friend, dealing with surprise guests and coping with illness. Mary is generally one of life’s copers, popular for who she knows and her ability to get things done. People know that she knows people who can influence things, especially with the onset of war. Although she is described carefully, this novel is not written in her voice which reflects the style of writing at the time.

The book opens with Mary helping her friend Catha to search for a house after her return from India with her husband and two of her children. Catha’s oldest child is Tony, who comes to find Mary as he claims that his parents do not understand him. Tony is a presence in Mary’s home for some time, and brings some of his interesting friends with him. Mary also worries about Elizabeth, Catha’s fragile debutante daughter, wise beyond her years in some ways, full of “the courage of youth”. Mary is also secretly concerned about her old friend, Kit Hungerford, who has also lived a quiet life for many years. Will Mary be willing and able to keep being the helpful friend and guardian to all and sundry when war is formally declared?

This is a fascinating and enjoyable book which features a likable character doing her best while some fairly outrageous characters create relative mayhem around her. I really enjoyed all the small details of her life, including putting complicated letters in the “difficult” part of her desk. She frets about certain things, wants to concentrate on the racing at the social event which is Ascot, wonders whether she makes the right decisions. She is concerned with servants that have been known to her family for years, even going out of her way to arrange for work and other social engagements for them. This is an absolutely fascinating portrait of a woman on the eve of war, written from a contemporary viewpoint without the benefit of knowing what will happen when war begins. The blackout which will be a concern for all households is mentioned as Catha has not hung blackout but is depending on shutters in her huge house. Young women are still being presented despite the oncoming conflict. Small details, tiny pieces give the full story of a very strange time, from the perspective of a quiet but remarkable woman, and I would love to read the sequel, also published by Dean Street Press.

This was one of the books I mentioned in my “Three for V.E.”  post on Friday. I said in that post I seem to have so many books from the Second World War period here, including several novels written at the time by some superb women writers. Having go so many, maybe I will make and effort to read and review those I have not got to let. After all that’s only dozens of books!