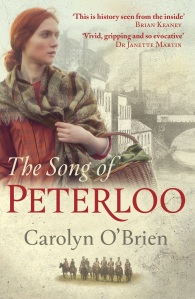 The commemoration of the anniversary of Peterloo is well served by this beautifully written novel by Carolyn O’Brien; an intimate picture of “this marvellous feeling” of joining with others to mark a call for a reform of workers’ situation,and a terrific picture of the event and the fear felt on that day in Manchester. Brilliantly paced and from different fascinating perspectives, this is a book of the people who were involved in a significant event on a human level. Featuring a woman of strength, curiosity and courage, this moving tale brings history alive as the characters tell their story of a life changing day of enormous excitement.  Manchester in early 1819 was a well populated place which was attracting new businesses and buildings rapidly, but even those who worked hard for long hours lived in poverty, with children who went hungry. Nancy and others want more than drudgery, and as she seizes any opportunity to learn, she becomes involved in the fight for equal rights. As other people gather around her, with their own agendas and reasons, the build up to the day becomes more tense. This powerful story presents a personal view of a famous event , and I was tremendously pleased to be asked to read and review this significant book.

As this book begins, Walter, Nancy’s son, is making the most of a simple toy, a stick, which is a scarce object in the hard streets of newly industrialised Manchester. Mary, a friend of Nancy’s, wonders about the events that led up to the day of the Meeting which has gone down in history as Peterloo, and recalls the first sign that Nancy was a determined and courageous woman. The novel goes on to introduce Samson, a military man who has had to take charge of the Mill, despite his own tragic past. Other characters and situations mean that Nancy is being watched by various people, as her education and experience mean that she becomes determined to show support for those trying to achieve equal representation for the inhabitants of Manchester. The picture of the real poverty that Nancy, her mother and her sensitive son try to survive contrasts sharply with the relative luxury enjoyed by the sulky Adelaide. The carefully drawn characters of Nancy and those she encounters, her singular appreciation of any opportunity for improvement, her quick wit and resourcefulness mean that the reader feels caught up in her fate. As season follows season, the inevitable challenge grows nearer, and the reader is drawn along.

This is a mature novel which does so much to humanise the events that would otherwise seem a matter of numbers, of logistics. Just as the later fight for the vote by women came with a great cost, there is no doubt that there was more to the story of Peterloo than the bland figure of deaths which occurred on the actual day. Part saga, part history and part the story of one woman, this is a novel which speaks of panic, of grief, but essentially of hope and love.

I am so pleased to be not only starting this blog tour for this terrific novel, but also marking publication day. This is genuinely a brilliant read, and I recommend it as a serious, and ultimately hopeful book.