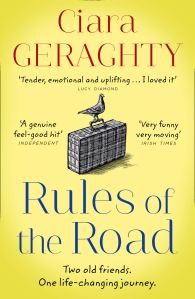 Terry is the sort of woman who worries about worrying. Super housewife, concerned mother and household cleaning expert, she has a friend who is the exact opposite, Iris Armstrong. Iris has gone missing. This is unusual and unprecedented, as Iris is the sort of person that it is impossible to miss- a retired nurse who runs the local Alzheimer’s Society with her positive energy and view of life. It is through a strange set of circumstances that Terry sets off to find her friend in her car containing her father who has dementia. When she finds Iris, they set off on a journey like no other as Iris seeks a solution to her situation. This is a book which seeks to combine a certain black humour and explore what is important in life, as Terry braves situations she has never previously encountered. It is an important book about the impact of life, the way it is lived and the choices we make. It is about different sorts of courage, and the daily truth of illness. I found it a most interesting read, and I am grateful for the opportunity to read and review a copy.

Iris has MS, and has previously fought to maintain her independence. It is now that she has evidently decided to travel to Switzerland to end her life when Terry decides that she must try to persuade her not to go through with it. Terry has always been a worrier, a fantasist about the worst possible outcomes. Her family, consisting of a husband with many fixations on doing the same things well, and two adult daughters who have both depended on their mother’s slavish devotion, have encouraged Terry to become totally devoted to them, cooking, cleaning and providing complete support. It is only Iris who has distracted her, found her another focus, provided other activities apart from  stain removal and only driving “where she knows”. Terry had always tried to care for her father, until his advanced dementia meant that he entered a Nursing Home which cannot accommodate him for the week that Terry abandons everything. As Terry and Iris travel in Terry’s old but solid Volvo, it is her father who provides a commentary of confusion and quotes from the Highway Code. Not that it is an easy journey from the Irish public via London and Dover to Europe, as Terry uses her “running away” money to fund petrol, in the face of communication from her baffled family.

This book offers much by way of interesting people that the small group encounter, including  a memorable meeting with a family member. It has a lot to say about the choices that women make in contemporary society, and that people make about their lives generally. Iris is an unusual and strong character and her observations about her illness are moving in their rejection of the predictable. The minute descriptions of life with dementia are remarkable. Probably the biggest challenge is to Terry, as she is forced to confront her fears and obsessions. The humour of the writing slices neatly through potential angst, and this is certainly a memorable read.