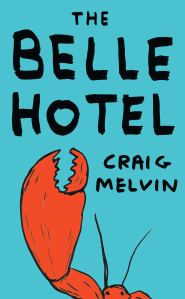 Foodie, funny and genuinely fascinating, this food – hotel – chef based novel is a treat for anyone who enjoys contemporary writing with a light hearted flavour. Set in the present day but going backwards to look at the establishment of the Belle hotel in Brighton, this features the training of a young chef in the ways of cooking some fantastic food, and his struggle to learn what is important in his life. There is celebrity spotting aplenty as Franco, the founder of the hotel, and Charlie cook for the well known of the 70s, 80s, 90s and beyond. There are real recipes throughout the text as the reader is invited to admire the skills and showmanship involved of turning out great food. I was pleased to receive a copy to read and review.

The book opens with a description of a truly terrible day for Charlie. The Hotel which has been his life, and that of his immediate family, stands ready to be repossessed by the bank unless he can find £10,000 by noon. To add to the confusion, his ex girlfriend, ex childhood sweetheart Lulu stands ready with her business partner to buy control of the Hotel where she too spent her time. He makes every effort, some of them quite daft, to raise the money; he borrows money, he gambles, he tries to rob a fruit machine. As he tries to get some money to the hotel in time, the narrative returns to his grandfather’s original opening of the Hotel in the early 1970s, supported by some money from “Larry”, a well known actor. He is a showman, a chancer, and he is determined to make Hotel Belle a popular venue for food and more. His son, Johnny, who actually works at another hotel, and his wife Janet are drafted back to help out. It is Charlie, however, that Franco decides will become a chef, carefully trained, sent to various restaurants, suppliers and colleges to learn everything about food and its serving. As Franco’s fame increases and the Hotel becomes a huge success, he collects recipes, receipts and other items of record in his unique book. Charlie seems to be set to continue in his footsteps, but before long the cracks begin to show. Can Charlie get everything together before he loses everything on one day?

This is a funny, affectionate and honest picture of life in a unique hotel during the later part of the twentieth century. The cheeky inclusion of real celebrities and actual events keep the book moving; the realistic dialogue and frank language can sometimes be a bit shocking but always comes over as truthful. This book maintained my interest and I was loathe to put it down; I feel that it conveyed a realistic picture of a fairly recent time in an often painfully human way. The characters were terrific, funny and sometimes touching. Franco is a real hero, whereas Charlie is often understandable and totally human. It appears that Melvin, the author, has a lot of experience in the hotel trade, and it shows throughout this novel. Whether you are a foodie, interested in a fictionalised history, or are simply interested in a funny and interesting read, I recommend this book.

In other news, we went to Stratford on Avon a few days ago. Anne Hathaway’s cottage was looking lovely under a blue sky, and the guides were very friendly and informative. Not really an accessible site for me, but still very interesting. We then managed to park in the town, where we visited New Place, the site of William’s final (and substantial) home. It was well worth a visit and featured a garden that was lovely even in February. I had forgotten how fascinating and lovely a place it is to visit!