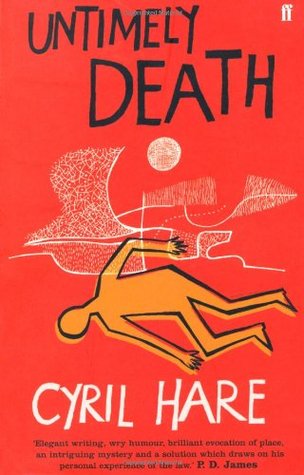 This is a fairly unusual book originally published in 1957, now available from faber and faber. Written by a vastly experienced barrister, the law is at least as important as the detection of crime in this novel. Not that it features a detective keenly searching for clues or suspects; for a while there is a denial that there has indeed been a murder or indeed a death. The circumstances in which Francis Pettigrew even becomes involved in the situation is circumstantial and seemingly accidental; the beginning of the narrative relates to childhood memories revisited. A brief novel in many ways, a clue may be in the original title: “He Should Have Died Hereafter”.

The novel opens with retired barrister Francis Pettigrew’s admission that the holiday with his wife Eleanor is all her idea, financing and eventual passing of her driving test. They find rooms in a farmhouse in Sallowcombe, where he had spent his childhood. He further discovers that a Hunt is on, and he remembers his childhood fears as he was not a natural horse rider. The farmhouse in which they stay is run by a Mr Joliffe, a widower, who lives there with his apparently widowed daughter and her two daughters. The relationships within the family seem to be complicated, as Francis witnesses a clandestine visit. A picnic ends with a sizable walk for Francis, as he revisits old haunts and discovers dramatic changes. Bolter’s Tussock is a special place in his memory, as he discovered a body there as a child. His experiences there as an adult leave him bewildered and baffled, as well as in pain as he has another enforced attempt at horse riding. This is quite a funny section of the book, as his riding is unpractised to say the least. When there is no body to be seen, Pettigrew becomes more agitated as he wonders if he has imagined everything. The women in the novel are frank and blunt, even when life becomes complicated. This is almost a book of two halves, as what Francis thinks he has seen is later extremely relevant to an inquest and a large civil case. As Francis returns to his old workplace, the lawyer is reminded of his life’s work and old friends, and the peculiarities of the law which confuses other people.

This book really worked for me on several levels. It is a fascinating mystery as no logical explanation seems possible to what Francis thinks he has seen. There is sadness as the revelations of the novel emerge. The obscurity of the legal point is not unique to this book, but it is well handled here and a satisfactory conclusion is reached. The characters are honestly described in all their complexity, especially the women. It is a little confusing at times, and the police do not emerge in a great light. It is a reasonably quick read, logical and always interesting, and the author’s own legal background makes it reliable on the legal points. There is a fair bit of humour, and in some senses it is a psychological mystery. A most enjoyable book, and having also read “An English Murder” I am keen to find others by this author.

Lots of books to review at the moment, fortunately the weather is still too hot to do a lot more than read! (Not that I’m complaining!) The plants are looking a bit sad at the moment, despite Northernvicar’s attempts with the hose. Still, we are getting lots of cherry tomatoes. There is also the Vicarage Tea Party to look forward to, so I hope that isn’t the day when we have a sudden downpour.

Another Christmas murder mystery, but this one is well written and could well be read at any time when the weather is cold and unpredictable. It has some standard elements; an ill assorted house party is stranded in a manor house with no contact with the outside world. Not just snow, but rushing flood water and the telephone being cut off leads to the sense of claustrophobia as the inhabitants of the house realise that there is a murderer in their midst. Being reprinted in 2017, its original setting in 1951 is of a country with politics still recovering from a war against fascism, a system of taxation that threatens the very existence of country estates and a class system still dominated by family tradition.

The book opens with an account of a scholarly old man, working in a freezing cold muniment, or family record room, in Warbeck Hall. Dr Wenceslaus Bottwink, an eminent scholar of history, is trying to make sense of ancient documents which trace the Warbeck family’s involvement in British history. Briggs the butler brings tea and the news that the next few days, being Christmas, bring visitors including an important politician, Sir Julius. Dr Bottwink is assured that he may stay, and he provides a vital role in observing the activities and attitudes of those new arrivals who come together to mark the final Christmas in the house. Lord Warbeck is very ill and it is felt unlikely that he will survive for much longer. His son and heir, Robert, is a dedicated leader of a fascist group in London, and soon proves to be a disruptive character and offensive to all. Camilla is a childhood friend, saddened and disappointed by the change in Robert, and Mrs Carstairs is an ambitious woman, always keen to promote her absent husband’s cause. Other characters emerge who add to the confusion when a poisoning occurs, and suspicions surface.

The construction of the plot and the description of a family house in decline are carefully built up throughout the novel. In keeping with a Golden Age mystery there is no violence or gore in murder, and the motives are not obvious, but clever. The sad thing about this book is the ‘anti-foreigner’ sections which show that despite the revelations of wartime Britain and Europe dominated by Holocaust and refugees, the feeling against those seen to be outsiders was still strong. Possibly Hare is using this book to criticise and show how destructive those attitudes were. There are traditions and expectations which show the pressures on individuals which go beyond their own ambitions and desires, but this book also deals with the details that give a full picture of suspicion and purpose. The weather is a minor character in this book, as is the large unheated house, and the atmosphere is chilly in every sense. This is a satisfying mystery with an intricate plot, well observed and minutely written, and ideal for a cold winter’s evening read.

So lots of Christmas mysteries around, and I have not even managed to get to the British Library Crime Classics’ contribution yet (though I have previously reviewed “Crimson Snow” link here : https://northernreader.wordpress.com/2016/12/21/crimson-snow-a-b…ic-for-christmas/ ‎  ).

Whatever you are doing, working (like Northernvicar and DoctorDaughter), coping with family, or having quiet few days, have an excellent time with much reading! I’ll still be reading, and possibly posting. Merry Christmas and a Happy New Year !!