A Daughter’s Hope by Donna Douglas

Hope is a difficult thing in Wartime, and in July 1942 the people of Hull had to have hope in the face of the destruction of much of the centre of the town in memorable air raids. This well written novel looks at the progress of the Maguire family and their friends in Jubilee Row, as some of the women are challenged in new ways as a result of the War. This is the third book in a series featuring the residents of the area, but could easily be read as a standalone as the characters featured are all well described in this largely self contained novel. The lives of women, even in wartime, are not lived without reference to men, but this book concentrates on the lives and loves of three women as it is definitely female led fiction. Thus there are some fascinating insights into the clothes, including uniforms, worn by the women in a time of shortage, and how they make the women feel. The author has obviously tackled a lot of research into the period, but has so absorbed the small and large realities of life that the narrative is never slowed down by facts. I found it a sophisticated view of what women’s lives were actually like at the time, when both in civilian and service life there are real challenges. I found this a particularly enjoyable book for its realism and reality, and was very pleased to have had the opportunity to read and review it.

At the beginning of the book the matriarch of the clan, “Big May Maguire” is overseeing the wedding of her daughter Iris, and getting cross with her oldest friend and sparring partner Beattie Scuttle. It is July 1942, and there is a lot of history behind all the relationships involved. She then has to break up an argument between the bride and Florence, her oldest daughter. Florence is shown not to be an easy person to be with, as she is resolutely single in a time when most women are eager to marry and have children. Florence is awkward and struggles socially, and is most fulfilled when at work for the Corporation supervising a typing pool of younger women producing bills and other paperwork. Even here she is unsure about the personal lives of the girls, so takes refuge in being strict. She is also aggrieved that she was sidelined for promotion in favour of Clement Saunders, an ineffectual man who has no real interest in the work. They are both commanded to attend a dance with local American airmen. Florence meets someone, and Clement faces a huge challenge.

Meanwhile twins Sybil and Maudie are arriving to work as WAAFs on a fairly local airfield. Their very different personalities soon emerge as Sybil flirts outrageously with both officers and aircrew, at the cost of relationships with the other women. Maudie as always feels obliged to look after her, and at least try to keep her out of trouble, but Sybil is determined to seize each moment whatever the risk. As both women meet aircrews who are regularly risking their lives on operations, it is a risky time to form any sort of relationship.

I found this a fascinating book because of its non straightforward attitude to romance it takes, when women have their doubts about what is going on in their lives. It provides intriguing story lines and insights into what lives would probably have been like when everyone’s fate was still in the balance to a certain extent, when the future was still unknown. I recommend it as an interesting contribution to the large numbers of books set during the Second World War which feature women’s lives.

A Sister’s Wish by Donna Douglas

Hull in the spring of 1941 was a dangerous place to be, and in this novel by the experienced writer Donna Douglas no one knows that better than Iris. She has lost her three year old daughter Lucy and the best friend who had been caring for her, Dolly. As she returns to Jubilee Row from hospital after a long stay she is terrified of returning home, not because of the heavy bombing but because of the memories that will be all around her. As she is greeted by her extended family and neighbours she is unable to cope, unable to meet with their expectations. This rich and multi-layered story of a complex family trying to survive amid the horrors of total war is full of characters who all have their own challenges and fears. While they mainly live very close to each other, there are details of other parts of Hull that were damaged, streets that almost disappeared and landmarks that were affected. Besides the impressive cast of characters, Douglas has completed a lot of research into conditions in Hull and the main raids that scarred the area, but the research is never allowed to slow the narrative. The characters are vibrant and seem real, each one having their own part to play. This is a novel that I enjoyed reading very much, and found engaging throughout. I was very pleased to have the opportunity to read and review this compelling book.

As Iris’ family prepare for her arrival at home, there is a subtle introduction to the people who have been waiting for her return. This includes her two remaining children, a baby Kitty, and nine year old Archie who has strong memories of his younger sister and Dolly, the friend who was looking after them. He feels guilty for not looking after her more, and will be challenged by someone who criticizes him for his reaction to the trauma. Edie has been the subject of a previous novel, but her story in this book is self explanatory.Left alone by the man she loved, she is now concentrating on Bobby as the focus of her love, even though a good friend would welcome the company of another single parent. It is Ruby, capable and happy to support anyone, that has to cope with horrible memories of her past when her most difficult relationship is challenged. As Big May Maguire tries to hold her family together in the face of the most destructive bombing Hull has faced, real shelter is difficult to find.

This is a deeply absorbing book which is difficult to put down, as the relationships in a complex group of family, friends and neighbours is severely challenged. As relationships are affected by loss, everyone must reassess what they truly feel, as the most surprising people show a determination and courage previously unsuspected. One of the main stories, of Ruby and her younger sister Pearl is very involving, as loyalties, love and a life-long role of caring is shaken. Douglas has tremendous confidence in her characters, and places them in settings which prove testing in so many ways. Her understanding of their feelings for a place transformed by bombers is touching, as it is not only the physical injuries they must cope with in this emotionally realistic novel. This a wartime story set in a place which suffered sustained bombing is different from other sagas in its handling of a true community of characters in a relatively small place. I recommend it for its understanding not only of adult reactions to a nearly impossible time, but also a sensitive handling of the trauma suffered by children. 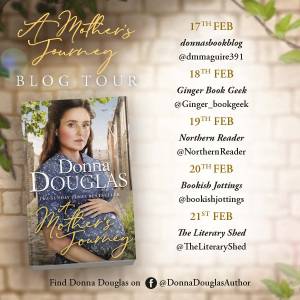 A new saga series set in Hull, 1940, is a good thing, and this immensely readable book is a wonderful first book. A young woman, Edie, makes her way along Jubilee Row, struggling with a big suitcase. She has a secret, but those observing her are intrigued by where she is headed. Two families, the Maguires and the Scuttles, are dominated by strong women who pride themselves on their involvement with and knowledge of  the streets of their area. They know that Edie is going to be sharing a house with Patience, who has many issues. There are daughters of both families who have had to learn to live without their husbands, for the war is affecting everyone. The shelters are well used. Two brothers, Charlie and Sam, have very different experiences, as some are still affected by a previous war. Meanwhile Joyce is enduring a marriage which has turned to abuse, and worries about her son Alan.

This a book that examines through the eyes of people immersed in the changes and challenges of war. It introduces and develops the stories of individuals and a community brought together by adverse circumstances in a lively and engaging way. I was really pleased to have the opportunity to read and review this book.

Edie’s story is a common one, as she recalls her lost love Rob, an RAF officer who was killed over France.  Her pregnancy is going to become obvious shortly, but her stepmother Rose still ensured that she had no home elsewhere. The two residents of the ground floor of the house, Patience and Horace, have a sadness of their own, and Patience is keen to preserve her home as a sanctuary. Meanwhile, young widow Iris is aware of her life long friend Sam’s interest in her, but cannot begin to think of anyone else after Arthur’s death. Edie has to discover the truth about those around her as she tries to establish herself in her new surroundings, and the reader too can be surprised and intrigued by the various people in the area. As Joyce finds daily challenges her story is particularly affecting, and many issues about the lack of choice for married women at the time are well explored. There is also closeness demonstrated between some people which is positive, although in every encounter there is the sense of threat from a war which is in the background.

I really enjoyed this book as a really lively and well paced read. There is a drive as the characters reveal much about their previous lives, and the revelations are well paced against a background of air raids and the real impact of war. I found this book immensely readable and it kept me wondering about the truth about each character; there are moments of real suspense deliberately created and well played out.  I was genuinely taken by surprise by some of the revelations which emerged. This is a saga which keeps moving and developing as the reality of life in Hull is revealed. There is a lot of research here that is well written into the story, it never holds up the flow of the narrative. I recommend this lively book with plenty of drama and human interest.