This is a novel from 1920, recently reprinted in the excellent British Library Women Writers series. Its simple title, Tension,  reflects the atmosphere of the book which Delafield creates with a deftness which befits the author of the gently funny “The Diary of a Provincial Lady”, though much of the action and relationships in this novel are far more tense than amusing. It contains some marvelous characters including Lady Edna Rossiter, whose demeanor and behaviour reminded me of certain other characters for Delafield’s novels, as she is firmly of the opinion that she is a blessing to other people. Her husband, Sir Julian Rossiter, has more understanding of the people who his wife is negatively affecting, but chooses not to intervene. It is not only adults that Delafield populates her novel with; there are some unappealing children who rejoice in the names of Ruthie and Peekaboo (or Ambrose). The story revolves around an adult education college that most of the characters are associated with; the countryside and the seashore are other settings in which Delafield sets her story. This is a book of polite attack, where one character is so certain of her authority and moral correctness that she is able to ride roughshod over other people, justifying it by calling it “giving” and seeing her role as helping others in the way they should go. Her mantra of “Is it kind – is it wise -is it true?” being almost opposite to what she actually says.

The timing of the book is significant, just following the First World War when the numbers of women exceeded men following the losses of battle. Therefore there are characters like Miss Marchrose whose decisions about marriage can fix them in a situation for many years, when being married confers a certain status even if it is without love or even affection. The dialogue is so vivid that it really evokes strong emotions in the reader. I have enjoyed many of the books in this series, and I was so pleased to have the opportunity to read and review this novel.

The book begins with a morning in the Rossiter household, when Julian tells his wife about a new candidate to be Lady Superintendent at the college of which he is a senior director. Two things make this an unfortunate announcement; firstly because Edna assumes a proprietary interest in the staff of the college despite their reservations about her interference. Secondly, Edna’s acute antenna soon picks out that the name of the young woman reminds her of an unfortunate event in her family when Miss Pauline Marchrose was accused of abandoning a rather needy young man. This is the essential strength of the novel. No matter what the facts of the case, from that moment Edna is on a mission to discover if the young woman presents a challenge to the status quo. She claims to have concerns about Mark Easter, father of the challenging children and effectively single parent. As other characters become involved, tensions between the oblivious Edna and the hapless victims of her oppressive oversight is carefully drawn, and a certain black humour emerges.

This is a novel which underplays the drama but is excellent in the detail which conveys the personalities involved. It is the sort of book which makes the reader react strongly with visualising the effects of what is said, the destructive nature of pointed conversation and misogyny or at least the label of gender mistrust. I found it an enthralling and powerful book and the contrast between the characters to be brilliantly achieved. It is a book of its time, yet accurately conveys the way gossip and assumptions can be destructive in any context. It has much to say on the position of women early in the twentieth century, the nature of marriage, and is altogether an intense and powerful read from a skilled writer. 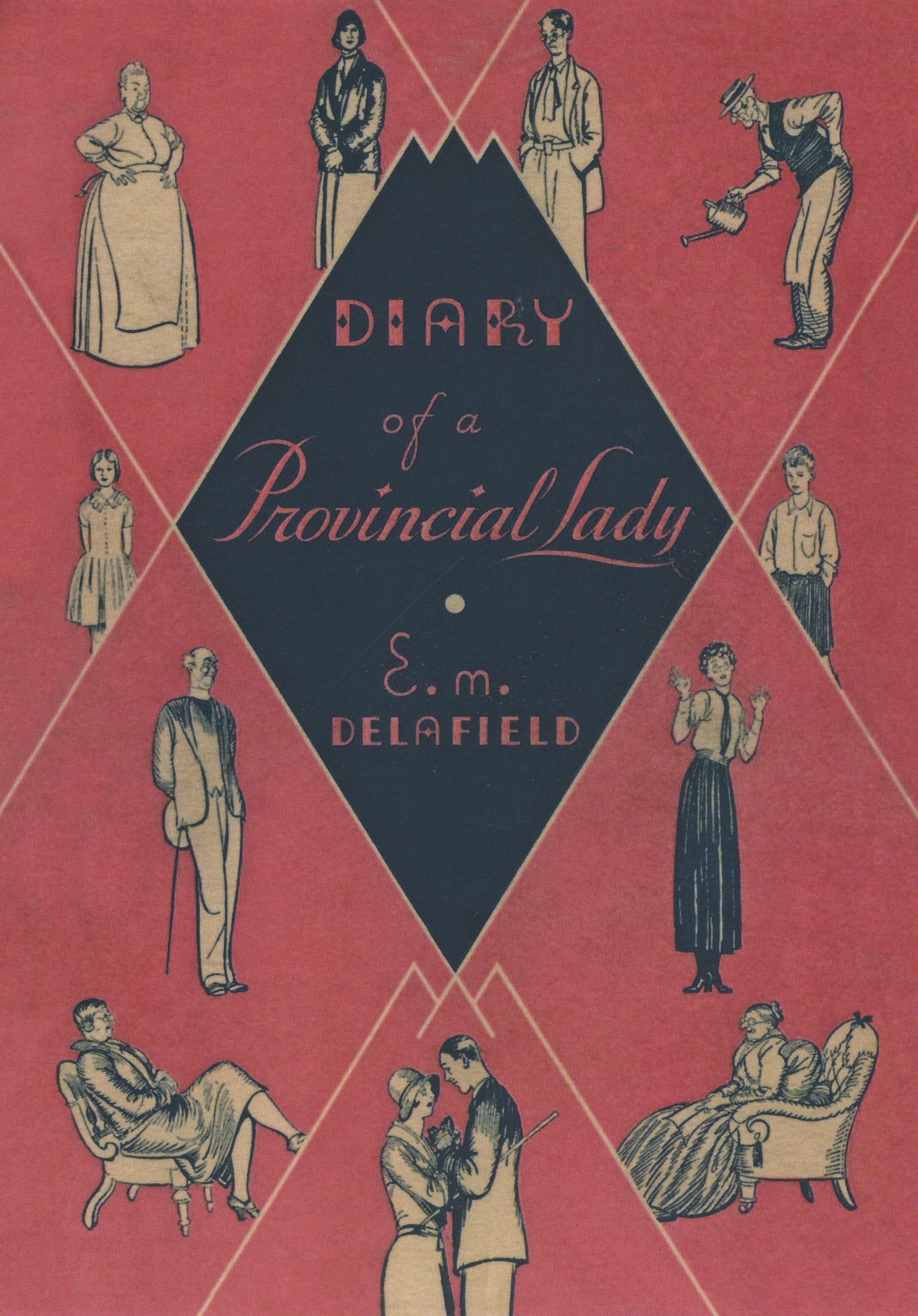 Diary of a  Provincial Lady by E.M.Delafield

This is a well – known book, even a classic, and deserving praise for many aspects of its subtle comedy, insight into a woman’s life and relentless good humour in the face of trying events. The unnamed narrator is always caught in the midst of activity; this is not the artistic musing of an idle writer shut away from life, but the almost notes of a busy woman, continually caught up in the family and domestic crisis which strikes a familiar note even in the twenty first century. This is a book of its time, first published in 1930, but which can still amuse today, especially in the illustrated edition produced by Persephone in 2014. While it is far from poverty, money is often tight in this small family, which after all includes a governess, a cook and a maid. However, this book was written at a time when having at least one servant was normal for even the lower middle class; in the days before labour saving devices in the kitchen and vacuum cleaners for the rest of the house, help with cooking and cleaning was perhaps a reasonable expectation. Certainly the carefully noted expenses, overdraft and even pawning of a family ring give the impression of a woman having to manage her money. Not that this prevents her from spending money on carefully described clothes and having things altered. This was a time when social convention demanded specific clothes for evening functions and a hat for everyday wear. We recently discussed this book at a book group and actually found much to talk about.

The book opens with a description of the narrator planting some bulbs, which are soon condemned by the visiting Lady B as being too late, and inferior to a Dutch brand. The narrator’s quick witted response that she prefers to buy “Empire products” is a bit deflated by her daughter’s pointing out that they came from Woolworths. The ill – fated bulbs become a theme throughout the book, as whatever she tries, her display is confined to empty or broken bowls. Odd friends turn up to stay, rejoicing in the name of Cissie Crabbe, and make demands on the household in which Robert, the husband and father takes little interest. Lady B. tries to persuade and influence the family’s politics “she says Look at the Russians” “I find myself telling her to Look at Unemployment”, and “Relive my feelings by waving a small red flag belonging to Vicky”, much to the astonishment of a passing maid. As the narrator visits Rose, her socially successful friend in London, she conducts the “Beauty Parlour experiment” and tries unsuccessfully to go to the Italian exhibition which everyone says she simply must see. She wishes that she had read the latest novels, and memorises just one fact on many subjects for conversation. She often feels distracted and inadequate socially, and tries very hard to do the right thing. We were fascinated by the character of “old” Mrs Blenkinsop, who has a very funny way of depicting herself of the centre of interest. Wrapped in blankets and always seen in an armchair, she is seen as frail and elderly, needing her adult daughter’s constant attention. We found it very funny that she was only in fact sixty – six, an illustration of the changing perspective of age!

It is difficult to describe why this is such a funny and enjoyable book. The characters can be exasperating, there is no great drama (though in pre antibiotic days even minor illnesses could have been serious) and this is not real poverty. The reader is swept along by the diary form, without chapters, as situations develop and are solved. This edition, with its witty and timely illustrations, does not include the three sequels, which lack the original spark but are still a fascinating insight into the time, especially as the narrator seeks worthwhile war work as war begins to affect the country. This book is a funny and enjoyable read, and while possibly an acquired taste, gives a fascinating picture of life in the interwar years.

So the Book Group found this an interesting choice! As with all Persephone books, mine is a lovely edition, but there are many editions available, especially the rather large paperback which includes all four books. Apparently this book appears to be on several lists of books you must read – and I would agree!

A short series of books that I have read recently has the character of “Our Vicar’s Wife” – a talkative lady who intends to stay for a few minutes and ends up staying for hours. Any resemblance to anyone…

The book is The Diary of a Provincial Lady by E.M. Delafield

The first novel is probably the best one, being the one that sets the characters up. The Lady is writing her Diary which features largely her inability to cope with her unruly children, her tricky servants and her mostly silent husband, Robert.  The locals are strange and wonderful, including Lady B, old ladies who have a strange attraction for everyone, their daughters, and of course the Vicar.

It may not sound so interesting, but the misfortunes and reactions of the lady makes for a very funny book, written in diary form. It is set in the early thirties, though obviously the following three books progress until 1939/1940. The lady is a writer, mainly of short magazine pieces, and her problems sometimes become the subject of her writing. She also does talks for the WI and other groups, and gets herself in all sorts of awkward situations.

The other books deal with odd holidays in France, a writing tour of America, (where everyone asks her the same questions ) and then finally trying to find something a proper job in war time. Odd characters turn up, such as another daft old lady who believes that everyone loves her, other workers in a shelter, artistic types and evacuees, all coping with blackouts, shortages and the general confusion of the early part of the War. Yes, these books won’t appeal to everyone, but they are the same daft humour as PG Wodehouse and others, set in a time familiar to readers of Persephone books.  I enjoyed the first and last books most, the other two just not being as strong, but all are funny, interesting and feature some great characters.

For those of you who remain unconvinced, a more modern version ( the author says she was directly influenced by the above when beginning this novel) is A Surrey State of Affairs by Ceri Radford.

In this book the heroine, Constance, begins a blog online detailing her relationship with her lawyer husband, her son – with -a- secret, her rebelling daughter and her excitable au pair. Her friends are also challenging in many ways, and include Reginald, the Vicar. Bell ringing is discussed, as are  the underhand tricks employed by another church team. I recognised some of this lady’s preoccupations, as she struggles with her family, facebook and life in general in a wonderfully comic way. Again she goes abroad, and tries to even up the odds against her. This feels like a very up to date book, as written for a newspaper apparently, and I wonder if it will last as well as Delafield’s. It too is very funny, and a good antidote to more serious and worthy books. I suppose is is Bridget Jones for older women…or what happened to Bridget after a few years of married life. I enjoyed it, anyway.