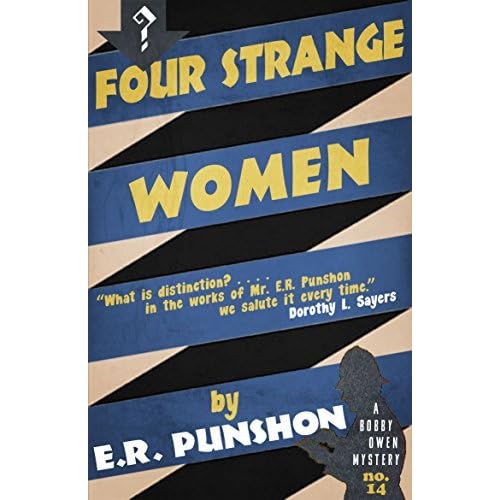 This rather strange but undoubtedly powerful book is no elegant murder mystery with a single tidy corpse and a neat list of suspects. This is a novel of mystery, suspense and a high body count, with subtle deaths that are difficult to sort out, even when it becomes clear that accident, straightforward suicide and singular cause are most unlikely. Red herrings, mysterious women and night time hunting for clues all make up a serious pursuit across much of the British Isles. Not an easy read, but a complex mix of fearsome situations tackled by the sometimes hesitant but always realistic Booby Owen, this book is summed up by one of the characters as “there’s nothing sends a man to the devil so quick as when the wrong woman gets hold of him”. The question of the wrong woman, or even man, becomes the central question of this atmospheric novel as dark deeds must be thoroughly investigated by the dogged and sometimes inspired detective.

Bobby Owen’s most recent adventures in detection have earned him the notice of Colonel Glynne, chief constable of Wychshire, and the older man proposes that Owen sees him with a view to an Inspector’s post, with duties as private secretary. A late night visitor, Lord Henry Darmoor, with his fiancée Gwen Barton, tell him of the strange deaths of two other young men, and their fears for Billy Baird. The two dead men had shared certain unusual spending habits towards the end of their lives, spending freely and buying expensive jewellery. There were also three women in the cases, Hazel Hannay, Lady May Grayson and Becky Glynne, daughter of the Colonel. Added to the mix are a singer of Welsh songs, a notorious nightclub and strange meetings. When an odd journalist adds his views to the unofficial investigation that Bobby undertakes, he has to chase leads and half ideas around, with minimal support from his police colleagues. The solution is far from obvious, and Bobby’s powers of deductions and suspicions are sorely tried as he faces the darkness and danger of a far from straightforward investigation.This novel, originally published in 1940, has been more recently republished by Dean Street Press, and I am grateful for a copy to read and enjoy. A strange darkness envelopes this atmospheric novel, as the fate of certain young men seems to hang in the balance. I found it quite challenging to read, as the possible suspects slide in and out of focus. It is certainly a masterly novel, skillfully rendered against a background of suspicion and some fear. The explanation for the events described, the somewhat robust view of the rules that Bobby takes, and the disturbing ending make this an unusual novel for its time, yet certainly worth reading as it is very skillfully realised and controlled by this experienced writer.

We are just back from a few days “Up North” or Newcastle as it is also known. Today we went to Beamish, which as you may know, is a huge site where various settlements have been recreated, each from a different time period. The Town is especially interesting, if crowded today, with various shops and a small and very dark pub. Definitely a place to visit!