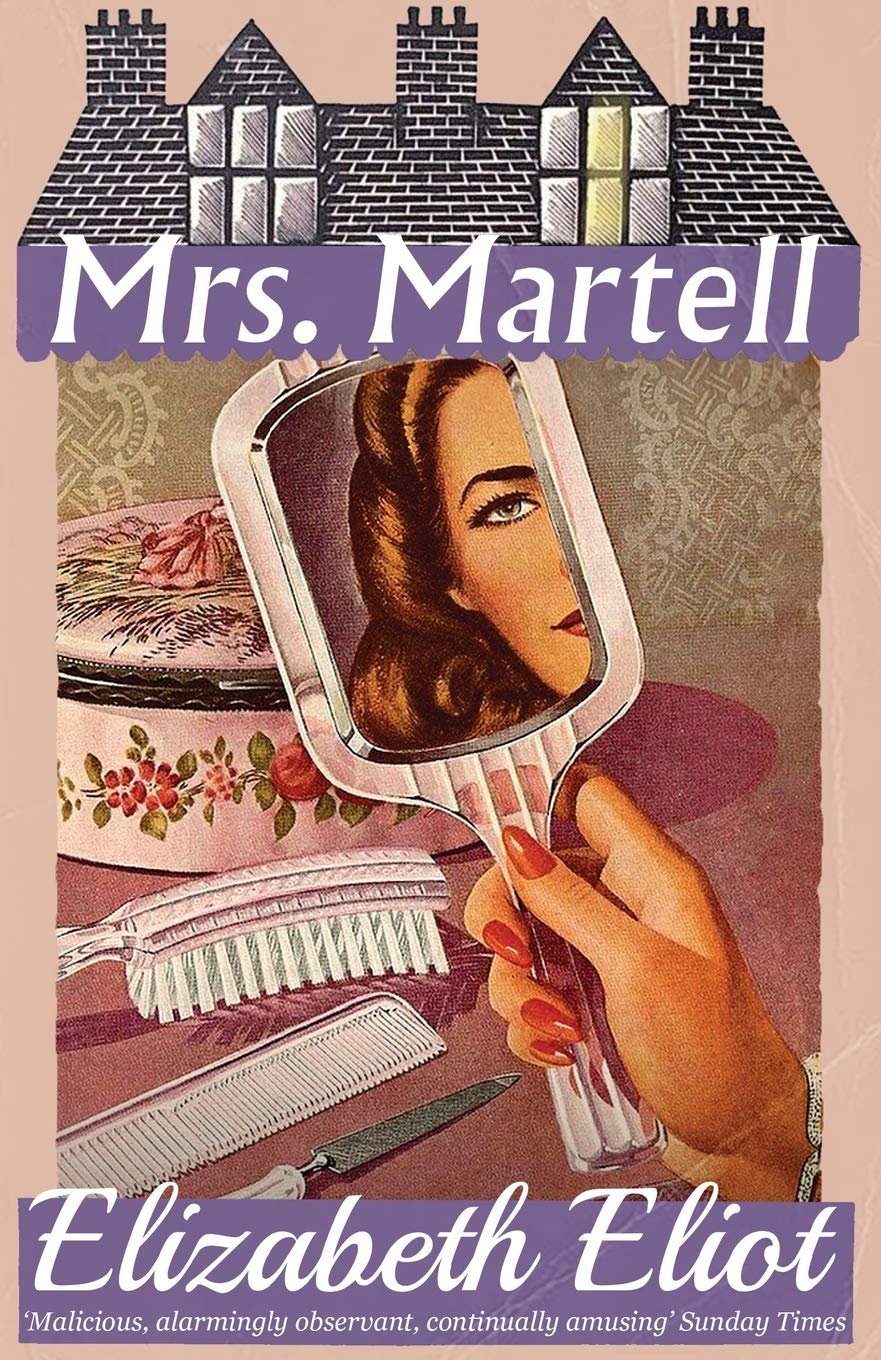 There are several “baddies” in very good novels, and Mrs Martell is one of those. Conniving with her eye on the main chance, the beautiful and determined Cathie is concerned with maintaining her appearance at all costs. She has dedicated her life to self improvement in order to get what she wants: money, position and a handsome husband.

Elizabeth Eliot’s 1953 novel, recently reprinted by the excellent Dean Street Press in both paperback and ebook format, portrays a woman who will stop at very little to get what she wants. Her family, her friends and everyone else are all used to great effect so that she can win her prize. Not that she is above seizing opportunities where she can, as she always hopes to encounter a “tall handsome stranger of a suitable age” whenever she makes a journey. This book is not only a testament to the determination of a particular woman, but also the choices women make at various stages of their lives. It has been a pleasure to read and review this fascinating book.

The book opens with Mrs Martell contemplating a murder which has just taken place downstairs from her flat. Not that she is frightened, rather she is eager to take advantage of the situation in her own inimitable way. She is contemplating Edward, the wealthy husband of her cousin Laura, with whom she has established a relationship. She knows that her cousin is young and innocent, and sees an opportunity to become the lady of the house, “the beautiful Mrs Edward West”. Her entire life has been heading towards this point, starting with her manipulation of her mother and her aunt as a child. She was briefly married to a Maurice Martell, but he proved a social disappointment with no ambition to meet the ‘right’ people. When she inherits some money she becomes independent. Discovering a distant cousin, the younger Laura, and her husband Edward, she rapidly makes herself important to them both, and she advances her cause with the difficult to please Edward. Not that this prevents her from diversions along the route.

This book is so driven by some brilliantly drawn characters that it works well. The settings are also described in a way to be vivid; the flats, the houses and the other places in a country still marked by the Second World War. Mrs Martell is a wonderful creation, as she schemes and plots to get her own way. There is so much to recommend this depiction of a woman with such determination, as she schemes against those who trust her. Laura is a sympathetic character, young and unaware of her husband’s true opinion of her, lonely and unsure. Edward is a brusque character, with exacting standards.

This book forms an fascinating commentary on the role of women of the time, but perhaps more interestingly the way a woman can be continually criticised and undermined.  It is a portrait of a society where women are not seen as free agents, except in the matter of their choice to marry, which in Laura’s case was taken at a very young age. She had lived a sheltered and limited life, and when compared to the knowing Mrs Martell, a very different woman. This is a very well chosen reprint from Furrowed Middlebrow and Dean Street press, and I recommend it for its insights, plot and characters.

This book is very different from yesterday’s reviewed choice! What will I attempt tomorrow, I wonder?

This is a novel about friendship. Narrated by Margaret, this is the story of Alice, “my best friend; one had to have one, and she was the only person in the school who wasn’t horrible”. Margaret knows and loves her friend from childhood, as together they try to survive school, their social season, love and life. It reminded me of Mitford’s “Pursuit of Love” and “Love in a Cold Climate”, in its description of a young woman from a relatively wealthy family trying to find an identity. The similarity is stronger as the narrator is the child of an unorthodox mother who sets up few or no expectations for the narrator, leaving her free to comment on another young woman. Though never fast moving, this book proceeds at a gentle pace as a young woman’s life and times emerges through the eyes of her concerned friend. I was pleased to have the opportunity to read and review this reprinted gem from Dean Street Press.

Alice is an unusual girl, accepting to a certain extent, spontaneous at others, and always memorable for those around her. This is the story of her from schoolgirl, negotiating difficult teenage years before that stage is acknowledged, and the young woman she becomes. There is great insight into a life of relative financial comfort, yet with limitations that are undefined and unclear. She is more vulnerable than the other girls, as one of her friends says “Alice does mind things too much and it makes one afraid for her.” Her older sister Sonia, with her model like figure and ability to wear clothes impressively strikes out away from Alice, being influenced by her friends and increasingly distant from her family. Alice’s own decisions and actions are sometimes baffling, sometimes touchingly amusing, and always interesting. The section which depicts her time on an unusual and worn boat is at once domestic, yet also reveals her basic optimism.

This is a book full of gentle insight and genuine understanding of a world which can be confusing. It is humourous in its way, and the dialogue is always cleverly revealing of so much; the times, the particular situation, and the characters who people this novel. It is a skilfully written book of its time, full of the colour of the 1940s, the clothes the food, the places where people live. It acknowledges the problems of servants and their frequent loyalty,yet also the problems of the expectations of young women, including the morals of marriage sometimes lightly undertaken. The novel displays its cast of characters well, especially when they recur after a distance of time and space. Eliot handles her cast, setting and plot successfully while maintaining the centrality of Alice in Margaret’s narrative. There are women who are older who behave badly, and others who are more kindly disposed to the young women.

This is a book of its time, and its recent reprinting by Furrowed Middlebrow with Dean Street Press along with other books by Eliot is an opportunity to read and enjoy this undervalued author. I recommend it as a good introduction to both her writing and more general writing of the time.