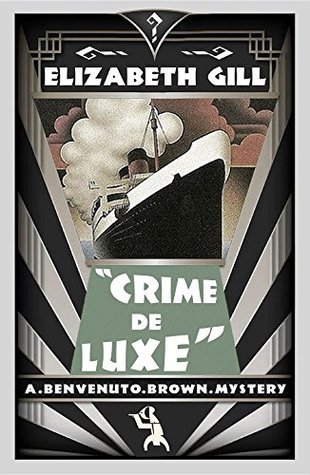 This 1933 book, recently reprinted by Dean Street Press, is full of surprises, deceit and even, for Benvenuto Brown, a hint of romance. There are only three books by this author, and this final novel shows her skill at dealing with an enclosed community in which the murderer is undoubtedly trapped. The creation of characters is as usual with this author very strong, as both men and women emerge as fully rounded with distinct mannerisms. Theories and world views are introduced and explored, as various nationalities and beliefs emerge. Gill’s well managed story pits her amateur detective against enough suspects to be fascinating as he tries to unravel the events on board a liner ploughing through the seas towards America. He does not seek out crime, but when it becomes obvious to him that at least one has been committed he will not relax until the culprit or culprits have been found.

When Benvenuto first boards Atalanta, the luxurious liner, he is contemplating a five day cruise finishing in New York. He is enjoying the people watching though there are those who are difficult to place; when he meets Miss Smith he is unsure what her history may be in her uncertainty. When she is killed he looks around him for suspects, some of whom are easily seen as involved, others less likely. A touching discovery in her luggage increases his determination to reveal the truth, even if it means suspecting the attractive Ann or involving himself in questioning the unlikable Lord Stoke. Strange events and even stranger motives emerge as further dangers emerge. While Benvenuto almost enjoys the challenge, he is wary of various people and amazed at some of the people who appear to have much to hide. Comparisons are made between America and Britain, political systems and marital fidelity. Yet the story never lags as Gill has set a strict five day timetable for mysteries to be solved and justice to be asserted, and she pours action and characterisation into each part of the novel.

This is an excellent read for those fans of Golden Age detection who enjoy developed, complex characters. The isolation of the murder scene means that eventually the guilty will be identified and the situation will be resolved, though there seems to be some doubt whether these things can take place within the short time before the ship docks. Benvenuto has little time to take stock or to examine his own motives for investigation; he is a constant active presence given his amateur status. Gill’s eye for detail is unfailing as she describes clothing, facial expressions and the slightest turn of speech which may define guilt or innocence. It is an enjoyable book in which the women characters are more than just passing illustrations of the narrative. I found this book maintained its tension much better as everything took place in a spacious but limited territory, as I felt her previous book was a little confusing with its many locations.  As always, Dean Street press have chosen a really good example of the genre and I am grateful for a review copy to appreciate a talented author.