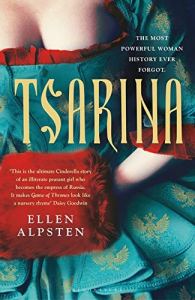 A novel of Russia which covers a large chunk of the life and reign of Peter the Great, but not of politics or battles, this is the story of Marta. Born an illegitimate villager where the local monastery own all the land and the work of the villagers, this young woman ascends to the side of the Tsar of all Russia. With little to recommend her apart from her physical attractions, her intelligence and wit, she is prepared to use any method to ensure her survival , knowing that her relationship with Peter, a huge and powerful man, is the only way she can live. This is a huge book in every sense, covering many years, battles and movements of people. Marta’s elevation from poor peasant to the highest woman in the land is a remarkable one; the difference between the extremes of poverty where a teenager can be sold for a few coins and the fabulous wealth of a Russian Tsar who can build a city in an inhospitable area. Unlike some novels set in Russia it is relatively easy to work out the names of the individuals involved, and the story of a woman’s progress is a lively and fascinating one. This novel has its passages of brutality and adult realities, but does not dwell on the horrors. It is undoubtedly a magnificent achievement in terms of sustained story telling and atmospheric descriptions of battle and its aftermath, celebrations and sorrows, huge wealth and extreme poverty. Seen through the eyes of a singular woman notable for her loyalty and courage, this is a powerful and immensely readable novel. I felt very fortunate to have the opportunity to read and review this amazing debut.

The novel begins with a description of life in a feudal village, where a living must be scraped from a harsh landscape. When Marta catches the eye of a local merchant, she is sold into household service and eventual abuse. As she commits a significant act of desperation, she runs away to a local town and seemingly into a worse situation. Escaping once more she finds herself in a good household where she is treated well until the town is overtaken by enemy troops, and she is on the point of brutal treatment by soldiers when she is saved by an officer who turns out to be close to the Tsar himself. Through the good offices of a friend she comes to the notice of the Tsar himself, and finds herself in the unique position of lover of an absolute ruler. As battles come and go, loss is experienced and challenges must be met, Marta comes to realise that she may well be at the mercy of a man whose mood and inspiration can change in an instant.

This is a book of characters whose slightest wish can change the fate of thousands of people. Marta herself is a brilliantly drawn character who has a life that is sometimes like a fairy tale, at other points like a horror story. The pace of this book draws the reader in and keeps them reading; it presents a world that does not necessitate any prior knowledge of the history of the country or people involved. It is the product of knowledge and research which flows through the story in a completely natural way. I found it to be an incredible read, and I thoroughly recommend it to anyone who has an interest in historical fiction.

There is a huge difference between this historical novel and others that I have reviewed here. It is dominated by a woman, and is truly honest about her motivation. I found this so readable that its considerable size was not a problem. It is a compelling read on many levels.