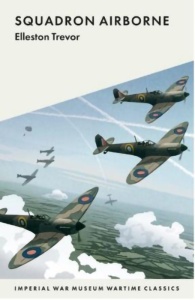 The recent anniversary of the Battle of Britain has reminded many of what happened on the airfields of Britain in 1940. This is a novel of what really happened on those airfields, not only from the point of view of the pilots, but also of the aircrews, the men and women who repaired, refueled and made it possible for those planes to fly. After all, while bravery, luck and skill meant that the pilots defeated the odds, simply being on an airfield under attack to maintain aircraft was very dangerous. This is a world of slit trenches, continuous raids by German planes and lives at risk. The dialogue and behaviour is very authentic, as written by someone who was an engineer with Royal Air Force, from the desperation of finding a private place with a member of the opposite sex, through the alcohol and cigarettes used to calm the nerves, through to the technical descriptions of the planes and their running condition . This is a novel originally published in 1955, now republished in the excellent Imperial War Museum Wartime Classics Series, from an experienced and talented author. I was really pleased to have the opportunity to read and review this excellent book.

The book begins with the arrival of a young pilot, Peter Stuyckes, who is only nineteen years old with the minimum of training and experience yet is imminently expected to fly combat missions. He is helped not only by the Squadron Leader Mason especially as he is so determined to impress, but also Daisy Caplin, a veteran ground crew member who decides to look after him from her lofty age of twenty years old. Mason tells him of the need to preserve the precious aircraft in the face of the Luftwaffe, a point explored in the excellent and informative Introduction to this edition. Thus Struyckes feels the immense pressure to not only to survive, try to bring down enemy aircraft, and make sure his plane is not too badly damaged. One of the remarkable things about this book is that all the action takes place in one intense week, which manages to encompass loss, fierce battles and almost continuous daylight sorties. This book manages to be intensely personal, as the mental state of pilots is looked at as well as the determination on the part of the ground crew to get the planes airworthy as soon as possible, or “top line”.  The writing manages to capture the sense of the real people, brave, reckless, sanguine, knowing and confused.

The writing in this novel is extremely involving from the first pages, as the beautiful pastoral scene of low lying mist cloaking the area and gradually lifts to reveal the planes. This is a book of contrasts but also consistency, as the pilots experience so many emotions in terms of flying and trying to destroy other planes. There is a moving element of them going beyond endurance, but also maintaining their sense of humour, even the ridiculous. The aircraft almost become characters in their own right, but they need intensive attention from the crew, especially as the nature of the action is so unpredictable and demanding. I thoroughly enjoyed this book if that is the right word for an engaging, frequently moving and sometimes amusing book. This is the story of survival amid conflict, at whatever the cost, and young people are plunged into a flight that feels against the odds. We have the benefit of hindsight, knowing that the airfields held up and prevented invasion until Hitler’s attention was distracted by another front, but this author manages to convey the sense of confusion and fear at the outcome of what must have seemed like a never ending battle. I recommend this book to anyone who enjoys vivid descriptions of the Second World War, and a very human story of the men and women who were there.

This is the seventh Wartime Classic from the Imperial War Museum I have reviewed on this blog. The standard is extremely high in this series. My favourite so far is “Plenty Under the Counter” by Kathleen Hewitt https://northernreader.wordpress.com/2019/09/22/plenty-under-the-counter-by-kathleen-hewitt-a-wartime-murder-mystery-with-and-element-of-comedy/   which manages to combine a murder mystery as well as a vivid account of life on the Home Front. That could of course change when I read for review “Green Hands”  by Barbara Whitton over the next few days!