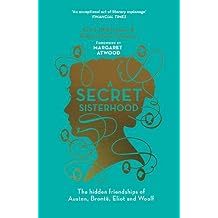 This is a book about friendship in all its human, genuine reality. Looking at the friendships of Jane Austen, Charlotte Bronte, George Eliot and Virginia Woolf with some lesser known (in the U.K at least) women, this is not a picture of constant devotion. Rather, there are misunderstandings, disagreements and complications in relationships which were sometimes difficult. The friendships cross many miles which frequently presented problems as correspondence was lost or significantly delayed, leading to bad feelings on both sides. The particular value in this book is the frequent revelation of little known or undiscovered documents which shed light on the friendships and the women involved. The existing biographies of most of these women are many and various, but this book by its very nature gives new insights into the lives of women who wrote, but also lived.

The first pairing is Jane Austen and Anne Sharp, the first world reknowned author, the second a governess with such severe health problems that her employment was uncertain. Austen of course was not recognised for her prodigious talent during her lifetime, but the prospects for Anne were far worse as she lacked family and friends to provide for her; the obscure details that the authors were able to find indicate a very poor background. Her employment as a governess in the household of Jane’s wealthy brother Edward brought her into contact with Anne, yet they met infrequently in the years to come. This part of the book is a little disturbing; medical procedures of the time were a little basic. The second pairing is Charlotte Bronte and Mary Taylor, the latter one of the school friends that Charlotte made in her varied scholastic career. Mary alone would make the subject of a fascinating book, especially as the authors have found a picture of Mary in her adventurous life taking in many continents. George Eliot was at a difficult stage in her life when she was first in contact with the celebrated American author Harriet Beecher Stowe. While Marian’s (Eliot’s) step son grew weaker and died, Harriet decided to take on the cause of Lady Byron which antagonised many of her readers. The distance between America and Britain led to delays in the post, but the book suggests that the real cause of the delays were the women’s family and writing problems. This book has to fill some gaps in the available letters between the two, but manages to maintain a realistic narrative. The final section covers the friendship between Virginia Woolf and Katherine Mansfield, whose relationship was shaped by the competing careers of two people whose writing was regularly challenging the usual genres. Virginia was a publisher as well as a writer, and her involvement with Katherine was of necessity complicated. This book shows both women at their best, but also at their worse as they were suspicious of each other’s output.

This is an immensely readable book which spares no effort in revealing the varying fortunes of women who wrote, who lived real lives, and whose devotion to each other varied with their own changeable fortunes. There are some moments of confusion where the narrative goes back into the past of one of the women, this was particularly so in the Harriet Beecher Stowe section, but it does explain why the women acted as they did. This book is a relatively short one for all the material it contains, but an extensive set of notes, combined with a select biography and a solid index will allow any reader to pursue any points of especial interest. This is a useful book as well as an informative one; anyone with an interest in any of these authors will something new and fascinating in this unusual and often touching book.

I have slowed down my posts this week as I have been struggling with and essay and other things; at least yesterday brought an exciting lot of book post. Obviously time will not go unoccupied in a Vicarage at Easter!