After some very sensible books I thought that I would do a quick blog about a cheerful subject – multiple, fictional and historical murder. Multiple because Serpents in Eden is one of the British Library Crime Classics books of short murder stories, mainly of the Golden Age, historical because I really dislike contemporary murder stories (with the exception of Ann Cleeves), and fictional because I don’t like true crime, from whenever…

Having said all the things I don’t like, I do like Serpents in Eden.  As a determined collector of the British Library series, I have my favourites in the series, which I have mentioned on this blog. I have found the short story collections more difficult to get into, but more rewarding in their way, as each short story has to include a murder and its resolution, however contrived. It’s quite a tall order to get all of this in a short tale, and some writers miss, but in a collection like this really only has the hits, as they have survived many decades in one form or another. Having said that, Martin Edwards and co have had to seek out some fairly obscure collections and magazines to find these, even when their authors are otherwise well known. Margery Allingham is included, in a lovely story of dark doings at a village flower show:

The disaster itself was not complicated.Rather, it was one of those occurrences which possess all the simple awfulness of Greek Tragedy.

There are murders here, unexplained deaths and unforeseen happenings abound, and the great thing is that if you are not enjoying one story, there will be another one along in a minute. I admire the way these authors can create a countryside world in a couple of paragraphs, as well as work in a plot. Some depend on using an established detective, but most create characters especially for the tale. There are at least three sets of short stories in this series, and they are all good reads (and good value for money).  I have also read Murder at the Manor,   a set of short stories set in the great houses of Britain (most are fictional). Again, even if there are some stories which do not ‘work’, for a reader, there are plenty that do succeed. They are difficult to review as the stories by different authors are so very diverse, but these books are ideal for picking up and putting down, although there is the temptation to read ‘just one more’. 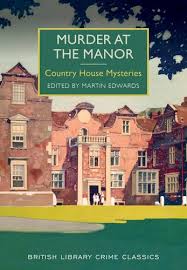 Having said all that about short murder stories, an entire novel with one detective and murder in a village is Murder has a Motive by Francis Duncan. It is a Mordecai Tremaine mystery, and I first encountered this detective (distinctly amateur) Murder for Christmas , a festive little murder available last year . Since then Vintage have produced three more titles, and this one is very interesting.

Originally published in 1947, this is a story set in a village which is dominated by a local amateur production of a murder mystery by the quite well off inhabitants. Mordecai is visiting the village doctor and wife, but he arrives just after a tragic murder is discovered and gets drawn into working out what is going on. The first murder is quite sad and shocking, but there are elements of farce as each member of the community comes under suspicion. There was a lot of deep thought here, as well as red herrings and bad atmosphere, but the mystery is satisfyingly complex and follows the finest traditions of a closed community of distinctive characters. I enjoyed this novel as a good read, a good combination of the obvious and the devious, as well as an interesting picture of country life. Mordecai thinks to himself:

Life was ugly and untidy besides being beautiful and marvellous and full of wonder. You had to see the dirt as well as the stars.

This is a good, satisfying murder mystery, well worth seeking out. I already have another one ready to read….