A genuinely funny book, where no one dies and only the dubious characters suffer a little, is always a great thing to have achieved, and Gerald Durrell achieved it many times. For a man known for his love for animals, he created some incredible human characters. This is a book of its time, the early twentieth century, where eccentric characters stalked the country lanes, theatres had strange and wonderful shows, and the legal system was still dominated by memorable people. As always, there is an immensely friendly tone in Durrell’s writing, as even the less than pleasant characters do not really suffer, but get their comeuppance in a thoroughly satisfactory way for the reader. Archie is the classic everyman, with secret dreams and genuinely good intentions throughout this charming novel. Originally published in 1978, this book has been reprinted by Pan in 2017 and made available again.

The memorably named Adrian Rookwhistle is a thirty year old man who works in a mundane job, doing predictable boring work. He lives at the mercy of a talkative landlady, whose cooking is appalling and personality dominates his uneventful life. He has secret dreams of adventure, but it looks horribly unlikely that he will ever do much more than plod along. Out of the blue he receives a letter from a dying uncle, who tells him that he is sending Rosy, a female with a drink problem, to him, together with the enormous sum of £500 to sustain her. He expects a showgirl who is past her best, so is stunned to discover that he has an elephant to take care of, who exhibits a tendency to seek out alcohol wherever it may be found. Abandoning the beautifully named Mrs Dredge, he seeks the help of his friend Mr. Pucklehammer as he decides to walk with Rosy to the coast in order to find her a new home. This is more difficult than it sounds, as apart from her alcohol dependence she has vivid memories of her time in the circus. So when she encounters certain people she lifts them up in her trunk. She picks out a squire in full hunt mode, and compounds her mistakes at a party where she finds some strong drink. Having said that, she is resourceful and brave, and is soon devoted to Adrian, whatever happens to the pair.  Lawyers, actors, judges and others combine to make for a complicated ending, but my favourite is Mr Filigree who is a firm believer in reincarnations.

The semi legal language of this book is very funny, and the whole style of the book has the quality of a jolly story. I really enjoyed its old fashioned charm and pace, and the frequent turnarounds of fortune. The lovely romance is at once realistic and dream like, and there is no doubt that this is a life changing journey for Adrian and of course Rosy. This Durell book is entertaining, uplifting, and I thoroughly recommend it as an antidote to frequently traumatic fiction.

I notice that this was a book I acquired at the rather wonderful Barter Books on a recent visit. One of the great attractions of this shop ( a small word for a great place) is the fact that you never know what you will find – old favourites in a new form, new authors who you can afford to take a risk on, lots of mainstream titles mixed in with some genuine finds. If you are ever near Alnwick in Northumberland, it is so worth making time to visit ; you will find something most enjoyable, and the food is excellent (thrice cooked chips, anyone?)

This is a book which most people would enjoy hugely. I read it in a Slightly Foxed Edition, but I am sure that it is easily available in many versions. It provided the basis for the recent tv version, which I haven’t seen yet, but will definitely try to now. 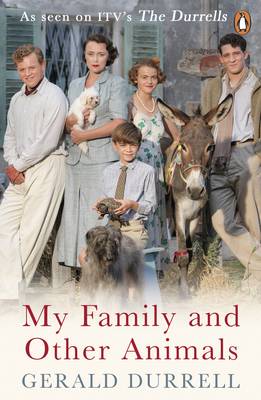 There are three elements of this book; the Greek island of Corfu, the animals (and other creatures) which the narrator collects, and a singular family. I’m not always fond of books set in “the Abroad” as my TEFL tutor called it, but this sounds a beautiful place in which to explore, capsize boats, and discover some very wild wildlife. The creatures which Durrell describes so well have great personality, and acquire some great names, whether they be pregnant scorpions which deposit babies over brother’s beds, or a huge sea gull (not an albatross…) who gets loose under a table at an animal ridden party. The party is also enlivened by snakes in a bath; an obvious solution to a problem at the time, and the “Magenpies” who rearrange the tables. The Family are strange beasts themselves. I was not convinced by Margo, but the brothers who variously write mysterious manuscripts and shoot things are marvelously eccentric as young men. I will now go and track down some of Laurence’s actual books, which I do not believe are comedies…My favourite character is Mother. Delightfully vague, she is easily persuaded to buy smaller or bigger villas depending on whether they wish to encourage particular visitors or not, and accepts the somewhat challenging behaviour of her offspring calmly, even if it extends to burning down part of the house. Even she acquires  an animal, whose devotion to her upsets even more the already upset domestic arrangements. I was so glad to read the later, but no less funny, story about her in “Marrrying Off Mother ” which I wrote about recently.

I realise of course that everyone else has read an enjoyed this book years ago, but if you want a cheerful book set in a beautiful place that is genuinely funny, this is a great read. Oh, and there are many, many, animals.

The first thing to say about these short stories is that it is not a sequel to “My Family and other Animals”. I am halfway through Slightly Foxed’s lovely edition of that book. https://foxedquarterly.com/shop/family-animals/   I did not manage to see the tv version (moving house etc). These stories are definitely for adults, as they include a horror story and extremely funny story  which even I found shocking…

This edition is in the new PanMacmillan series, which I have been picking up copies of books of for the last few months. I must admit that I have not spotted  a common theme for the choices, though the Winston Graham looks very promising.

Back to this book. The title story does refer to the original Durrell family, as the adult children decide that they want their mother to remarry, with some very funny results. Esmeralda the perfumed pig turns out to be a valued member off the family, while Moses the parrot has such a turn of phrase even dockers are embarrassed. Durrell is asked to  lecture in America, where cultural differences abound. Fred, the Butler, has a nice line in Biblical explanation, while Great Uncle Rochester continues to fight the rebel horde of Yankees. There are surreal moments in these 8 stories, some of which Durrell claims are true, some “semi true”. They are all well written and often funny. This is a super book for picking up and popping down over holiday expeditions, though rarely will you be in charge of transporting large predatory cats as in one story…

I seem to be turning to a lot of collections of short stories at the moment. I have a copy of Fay Weldon’s short stories, Mischief, which represent stories published throughout her career. They tend towards weary feminism at the start, at least. Dancing with Mr Darcy is a collection of stories inspired by Jane Austen selected by Sarah Waters in 2009. They are a very varied bunch! It is interesting contrasting stories by one author with a collection of stories by vastly different authors. While Durrell has a very picturesque style, Weldon stories seem very much of their time. The Jane Austen stories are touching, daft and funny, and a very mixed collection written by diverse authors. So, back to the collections of short stories…