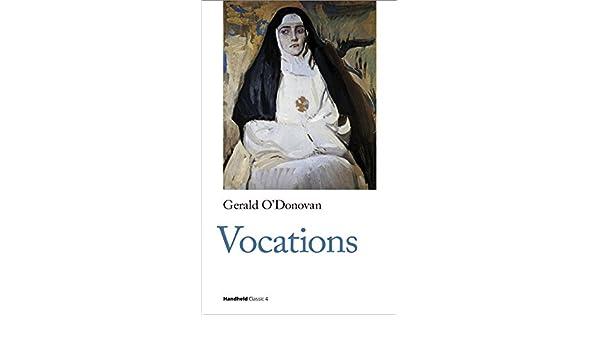 This Irish novel, originally published in 1921, reprinted by Handheld Press, is a tremendously engaging read. Dealing with the fates of two girls in Catholic Ireland, it is a searing picture of the way that the established church worked in small communities dominated by priests and the local convent. Moreover, it presents a picture of the way young women were treated by those with a vested interest in vocations to the life of a nun, and the restricted life which is offered to those who are not attracted to the religious life. Catholicism, class, money and the lives of women are all carefully drawn by an author with a deep experience of the daily lives of those dedicated to a church which has developed in significant ways not always to the benefit for the most devout.

The book opens with Winnie and Kitty, daughters of Tom and Johanna Curtin, bemoaning their lot. At least Kitty is struggling with their tiny social life; restricted to going to church and walking through the small town in which they live. Winnie has become attached to one of the few men she is allowed to meet, Father Burke, a local priest who has a large opinion of himself and his effect on the local devout women. Kitty admires a local doctor who she has never actually spoken to, Thornton, and weaves many fantasies about him. Their parents are relatively well off grocers, running a successful business and wealthy enough to send them to a select local convent school. They both have ambitions for their daughters; Tom wants Kitty to marry the son of another local tradesman and join their businesses together, while Johanna is even more determined that both girls should enter the Sisters of Mercy convent and become professed nuns. Winnie finds much to admire in convent life, especially as it will bring her into daily contact with Father Burke, and eagerly embraces the opportunity to enter as a novice. Kitty is told she is expected to marry Joe Duggan, who she finds appalling, and suffers another disappointment. Thus she makes a decision which seems as if it will define the rest of her life.

It is the small details of this book which make it so engaging; it is not a happy story but it is a consistent and well -constructed novel. The very furnishing of the girls’ room shows a new luxury that imprisons them while supposedly adding an air of refinement. I was surprised at how much liberty Father Burke takes and how much Winnie can openly show her devotion, and how determined Johanna is to surrender both of her daughters to the cloistered life. As one of the sisters scents freedom, she begins to see the world as a multi coloured place full of opportunity. The messages given to the girls by all and sundry seem to shut down their options so early; the pressures on them to comply are overwhelming. The nuns in the convent at first seem all alike, it is only when stress occurs that their personalities begin to show clearly. The subtle messages of how convent life is one of harsh routine and repetitive activity emerge clearly, and the petty obsessions and jealousies which dominate their lives. This book tries to show how hard the convents of the day sought and tried to retain girls for a variety of reasons, not for solely devotional concerns. I was very grateful to receive a review copy of this book, and it is a fascinating insight into the life of women in early twentieth century Ireland.

In many ways this is an unusual book, but it is a very good read. Nobody can say Northernreader sticks to the same sort of book! I am finding another Handheld book fascinating at the moment; “The Akeing Heart” by Peter Haring Judd. It is going to be tricky to review , but very worthwhile. The Handheld books are fascinating and well worth looking out for! Why not have a look at http://www.handheldpress.co.uk