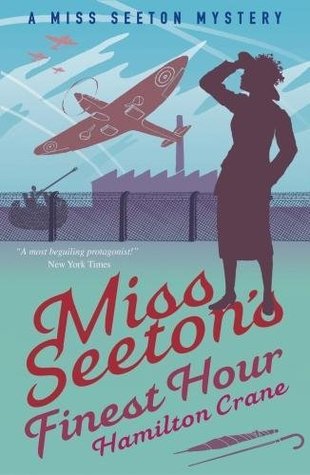 Miss Seeton is apparently something of a literary celebrity to those in the know – books about her cosy cases have apparently been appearing since 1968. She appears in most of the books as an older woman who helps in the detection of crime with her imaginative pictures. This book is called a “Prequel”, set in 1940, right at the beginning of the career of Emily Dorothea Seeton, teacher of art and organiser of children in London. Not having read the books set later in the twentieth century, I imagine that this book sets up some of the things that will run throughout the later books, if only the concept of Miss Seeton’s sketches being more than just pictures of reality. In this book she is a young woman of twenty nine, very attached to her widowed mother, living in Hampstead and volunteering for the war effort. She is involved in providing refreshments at London railway stations and more importantly, organising groups of children who are not evacuated to the countryside.

This is the period of the Second World War when a lot was feared by way of bombs, gas and crucially invasion. People expected an invasion attempt at any moment, having seen the way other countries had collapsed before the German forces. People at all levels were desperate to work out what they could do in the case of invasion. They were nervous of fifth columnists, those who may betray defence secrets to the enemy, and were told that “Careless talk costs lives”. It is into this unsettled time that someone found sketches by Miss Seeton which seem more than mere records of the sights of London, that even seem to have suggestions of what was going to happen over the next few days. A secret government department gets involved and she is summoned to the Tower of London. Her conversation with Major Haynes means a change in her life, and she leaves for an assignment in an aircraft factory. At this point the action gets more dramatic,as she encounters a local doctor, a talkative landlady and some of the young women who have been working in the factory. It is when she gets to the secure establishment and meets Mrs Morris that the real challenges begin.

This is a well written novel of wartime mystery and action. There are a lot of the stock phrases of wartime, such as “Don’t you know there’s a war on”.  It is full of the small facts of wartime life, the amount of butter allowed, the problems of making journeys in the blackout, the difficulties of conversation with strangers. Miss Seeton is a carefully described character, how she feels about leaving her mother, how her father’s legacy as a brave soldier encourages when she is nervous. Even the minor characters are carefully described, sometimes with humour and always with care. When it comes to issues of trust in the face of accusations, it was fascinating trying to pick up the clues, and seeing if Miss Seeton was able to do the same. This is a book which really conveys a sense of the time and place, the speech patterns, the language, the little hints of what life was like. Although this particular book is different from others in the series, I would be really keen to read the books in the main series. I recommend this book as a well written story of the early part of the war, and an introduction to a unique character.

I found this book in a bookshop in Spalding, Lincolnshire, which had an excellent and unusual selection of books ( and a discount on the day I visited). I found some really interesting books there, and as it was the first day of holiday I had some money left. Apparently it was called “Bookmark”, and I can thoroughly recommend it ( and the cafe inside the building)