“A Golden Age Murder” it proclaims on the cover of this book, another Dean Street Press book send to me for review. It is the final book published by Harriet Rutland, and it is a strong book notable for several twists and turns, some of which are totally unexpected. A clever book, it is an experience of reading a novel written in war time (1942) when the dangers of the blitz are a real and indeed intrude into the action. This is both a classic and an unusual novel, even if the identity of the killer is not obscure long before the end, even if only because there are relatively few possibilities. The horrible nature of the characters is so cleverly written that sympathy is in short supply, but the narrative is so compelling the reader will want to see how it works out.

Murder happens in a household where the parents are awful, the daughter difficult and the son and wife challenging. A beautiful young teacher is involved, a will is debated, and the threat of physical danger is ever present. A locally unpopular head teacher is dangerously susceptible to the charms of Miss Charity Fuller, and indeed dominates his school with more than an iron rod, much to the dismay of the teachers and at least one parent. His wife, Mrs Hardstaffe (Rutland loves playing with names in this novel) is a hypochondriac with money which proves to be a dangerous combination. The daughter, Leda, is a tough, capable woman, obsessed with her dogs and war work. Into this unhappy household comes Arnold Smith, failed writer searching for inspiration. As he becomes enthusiastic about writing a murder mystery, he keeps saying that he is going to “murder” one or more of the people around him, as he becomes a lodger in the challenging household.

This is quite a tightly written novel where there is a full set of motives. The police appear and feature as amusing characters, trying to do their best, but they seem largely ineffective. Not that they are figures of fun, but their questioning does not seem to bring results. There is a painful description of a maid who is a refugee from the German forces; while she is quite faithfully described she reflects a time when the full horror of the treatment of Jews is only just emerging. So she is seem as sensitive and melodramatic when perhaps later views would have been more sympathetic.

This is perhaps not the best of the Golden age novels, but it is a deeply interesting portrayal of a time and the people living through it. The lesser characters are well described, as even the cameo of an evacuee’s father takes its place in the overall picture of a horrible head master. This book features some truly chilling moments, and yet given the time at which it was written almost takes it into a picture of a country at war, when not everyone ‘pulled together’.  I recommend it as a gripping read of characters stuck together by fate, destruction being a real possibility. 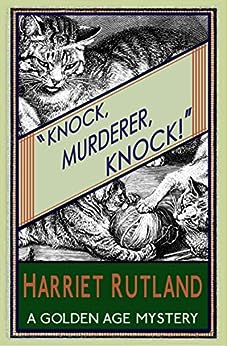 This is a Golden Age Mystery not to be missed! Available from Dean Street Press, who have brought out some excellent murder mysteries, this marks the 1938 debut of a woman writer who is confident enough to make quite a lot of the female mystery writer in the book itself. One of the great things about Dean Street Press is its championing of female writers of the mid twentieth century, making these little known books available once more.

Rutland sets her tale of multiple murder in a ‘Hydro’, a sort of hotel for those who wanted some medical attention, but were often in need of a long term place to live, with full meals and maid service. Certainly the widowed, single and other residents are a singular lot; women who have nowhere else to be, ex military men seeking some form of community, a family whose grown up daughters feel trapped by their surroundings. A younger woman turns up, and her fashionable clothes, daring make up and overall behaviour shocks and fascinates all the other residents. It seems that she will provide enough valuable scandal for months to come, when a shocking murder shakes the establishment to the core.

The arrival of Inspector Palk gives much reason for complaint, as despite his methodical questioning and determination to solve the mystery, he struggles to justify making an early arrest. Mrs Dawson, resident mystery writer makes admission as to method, and quotes her theory

“Well, have there were to have been several murders in the book. Two or three, at least. The reading public nowadays is never satisfied with only one murder. They like plenty of thrills for their money.”

In this book there is more than one murder, and I found one a little disturbing. The characters in this novel are all convincingly strange and of their time. As a closed community mystery it works well, with some very funny interludes, such as the charabanc trip to see the murder site which enrages some of the residents. The final scenes are suitably tense, with an interesting moment of drama as the revelations are made. I particularly liked the ending when all is explained and resolution reached, even if the solution is admittedly an old – style characterisation.

Overall, this is a satisfying read for anyone keen on Golden Age mysteries, especially as it almost makes fun of itself as the readers and writers of these novels appear with their suggestions. It is a confident novel that includes all the usual suspects and interesting twists. I really enjoyed it, and yes, struggled to put it down.

Yes, another review in double quick time! I have just been accepted to do another M.A. at the University of Derby, this time in Public History. As Northernvicar is also going to attempt to do the course, this could be fun. So maybe from September the reviews could slow down a little…