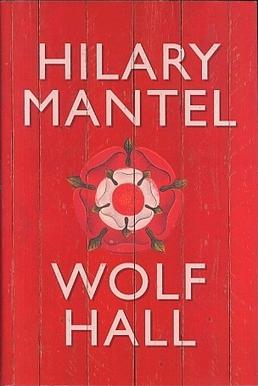 How do you review a book that has been around for so long, been staged and on tv? I have recently reread this book for another project, and been overwhelmed by just how good it is, and how reluctant I was to finish it. My previous comments on it revolve largely around how long it took me to read it, how tricky it was to follow, and such like moans. It is still a long book, an undertaking to read, and requires a new mind set to appreciate the new view it offers of a time, place and people. Diana Athill wrote “I can’t think of anything since Middlemarch which so convincingly creates a world.” As Middlemarch is a favourite of mine for its creation of a time, place and people, I can completely understand what she means.

Wolf Hall is a book about Thomas Cromwell. It is told from his point of view, but not in the first person. This creates a narrative in which we see the world through Thomas’ eyes, be where he is, know something of what he knows, but we can also pull back and see him, asking questions of himself as he sorts out the lives of others. Thomas in this version is a ‘fixer’, the supreme pragmatist who does what has to be done to whoever needs sorting out. His memory is a blessing in this work, but a curse as he copes with the loss of his wife and daughters. The loss of his family haunts this book, as does his awareness of ghosts of the past, those who lived in a house before him, and Cardinal Wolsey’s enormous personality. He copes with the women of the court, Anne, Katherine, Mary and the others that serve them with caution and sometimes confusion, seeing them as another problem to solve as well as possible actors in his scenarios.  King Henry is sometimes a child to be placated, an impossible, querulous dictator. Cromwell has his measure in this book, but remains under no illusions that he must proceed with caution to avoid potentially fatal confrontations.

This is not a perfect book. It takes its time to get anywhere, and sometimes gets bogged down under the weight of its constant thinking, reaction and action, plotting and planning. Yet it is a human book in its diverse progress, the tangents and confusions that we can understand. Life in this period could be and often was short and brutal, and this book shows us how and why. Mantel has said that she was keen to look at the events of Henry’s reign through other eyes than the wives, the King himself, the minor functionaries of court. Thomas Cromwell was the supreme fixer of problems and situations. This book shows you how and why, as well as the human thought processes behind his survival and success in a dangerous time.

The project that I am wading through huge books for is a talk on the Reformation in fiction. The Reformation in the church of the early 1500s is not really a subject for direct fiction, so I have been reading things like Dissolution as well as Wolf Hall to try and get some of the aspects of the subject illustrated. I am ploughing through the immense “The Man on  a Donkey” by H.F.M. Prescott which makes Wolf Hall look like a short story! Many characters, some real, some fictional, are all heading to life changing events.  I am about a third into the copy I have, and it was really the first novel of three. Brilliantly written, but so long. So very, very long…

A book which is so much easier to read than its predecessor!

Bring up the Bodies by Hilary Mantel

is of course the massively award winning sequel to Wolf Hall, which I have reviewed before. The difference is  that Bring up the Bodies is, in my humble opinion, a lot more readable! The difference is that I read it in two months, rather than years. Admittedly that was partly as a result of it being on my e readers (kindle) when I was in Shetland when I didn’t have access to as many books, but I honestly think that I also found it less easy to put down than Wolf Hall. I think that the narrative flowed so much better, and I am not sure how, but that the problem of Cromwell only being described as “he” was solved.

Possibly the theme of this novel, that is the fall of Anne Boleyn, lent itself to a tighter narrative, or the characters were more manageable. The shadow of Wolsey is still there, as the lost family members, but here we see Cromwell as a subtle manipulator who didn’t actually need torture and threats to get results. He saves a friend and condemns others, he works on people so that they condemn themselves. The chilling line, “Bring up the Bodies”, echoes around the novel. The way that Henry the king expresses his wishes, tired of Anne’s brittle attractions, wanting the simplicity of  Jane Seymour who is portrayed as either genuinely or deliberately naive. He is not drawn as a sympathetic character, rather  a changeable, complaining monarch who tries to recycle gifts between his ladies. There is the breath holding moment when the question of succession seems to be imminently solved, but altogether this is a whining king, bewildered by his wife and petulant that he cannot have his way. He must be managed by Cromwell, persuaded to wait, reasoned with over his relationships. This is the tension reflected in Freemantle’s Queen’s Gambit, of a dictator getting his own way, however unreasonable.

Wolf Hall does appear on our Bookworms group next year, over the summer to give chance for first time readers to get to grips with a big book!

1. This appears to be a shorter book than its predecessor. How do you feel about the inevitable comparisons?

2.The main character, Cromwell, is almost seen in the first person. Is he convincing? are there any other stand out characters, and if so, why?

3. How easy is it to keep up with the narrative? Are there turning points in the novel which stand out?

4. Is the writing interesting, gripping or boring? Were you eager to find out what happened next?

5. Is it a typical historical novel? Is it typical for Mantel? Do you like this genre, or is it completely different from your normal fiction choices?

6. Would you recommend this book? How would you describe it?

Here is hoping that after 4 (!) visits to Hadrian’s wall in a week, including a book launch, I get round to writing a few more posts soon…

Well, after about 3 years, I finally finished it. The prize winning Wolf Hall has taken me three attempts and at least 3 years to finish. I think that might be in real time for most of the book…

I have said it about other books, but this time I really mean it. This is a BIG book.

I actually ordered it before it came out, I was so confident I would enjoy it. So that is one reason it has taken me so long to read it, an early hardback edition takes some lugging around. I even visited Hampton Court during my marathon reading, and was sorely tempted to buy a paperback edition as I had left my copy at home. At least one bookgroup turned down the opportunity to read it as it was too heavy for some of the older members to hold (in pre paperback days at least). I think it is also a bit on the long side for a monthly book group, but I would say that, wouldn’t I?

This is an amazing, beautifully written book. Some of the scenes in it remain with me. Possibly this is a reason why you cannot read it fast; it’s like a rich chocolate cake which needs eating slowly as it is basically so complex and detailed. Admittedly, it does suffer a little from being set in a time when everyone was called Henry, Thomas, Mary or Anne. Add to this the notorious problem in this volume of Thomas Cromwell, the chief protagonist, operative and character, being referred to as “he” and many a page and paragraph needs to be read twice. The big events that this book covers, such as the ending of Henry’s marriage and the beginning of the stripping of the monasteries, do need a lot of careful thought. The downfall of Wolsey is seen as a gradual event, whereby he was stripped of his property and wealth so that Thomas and his closest companions are forced to adapt and struggle to provide for his household.

This is a book that makes the big characters of Tudor history human. Thomas makes an amazing ascent from bullied child to brilliant strategist. Wolsey is a jovial but powerful worker for King, church but mostly himself. I liked the character of Mary Boleyn, flirtatious but vulnerable, but I did get a little exasperated  with Thomas. Maybe it is because he is such an honest picture of a whole person (Oliver C’s “warts and all?) that Mantel paints him as a brilliant man, the supreme fixer of the realm, as well as someone whose priorities are a bit dubious.

This  book is populated with engaging characters, humourous asides and what seems like immense research. I did Bolt’s “A Man for All Seasons” at A level; I recognised so many of Thomas More’s lines that I slowed down reading the end of the novel just to see if they were direct quotes.

This is an immense novel. I did enjoy it, in the same way as I enjoyed A Suitable Boy, such a long read that the characters linger in the mind. I also got Bringing up the Bodies on the day it was published. I hope that it doesn’t take me years to read that…