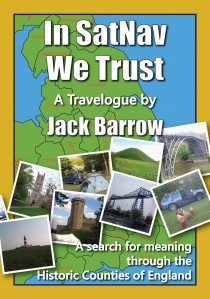 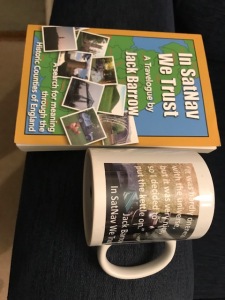 The Satellite Navigation device is called Kathy, the vehicle is called the Truck and the accommodation is the Khyam in this unusual and very detailed account of “A search for meaning through the Historic Counties of England”. Jack Barrow made a largely spontaneous journey around England in thirty- nine days, visiting a county a day in search of the meaning of contemporary life from observation and more. It is a small amount of time to spend in each county, but this fascinating and addictive account tries to draw out something of the nature of each area. Barrow journeyed alone, meeting a few friends and lots of strangers, even if they were the managers of campsites. Travelling from the well established Oxfordshire through the less well known Rutland and Middlesex, minimal use of the internet and some actual books, Barrow’s journey is a bit haphazard but always fascinating, especially as he tried to avoid major roads, including motorways. As he aims to find something interesting to look at or experience, he knows that he must also find somewhere suitable to camp each day, which can sometimes bring its own stresses.  This is an unusually honest travelogue, meticulous in its detail and fascinating in its speculations and observations. I was really pleased to have the opportunity to read and review this interesting book.

The journey begins on 1st May in Oxford, partly to witness the singing on Magdalen College Tower. Interestingly he thinks that arriving in Oxfordshire the night before was sort of “cheating”, and it indicates that although his rules for the journey, though self imposed, are quite strict. That does give a structure to what otherwise could be a list of counties and campsites. The first section does include a reminiscence of a May Ball (usually in June in Cambridge I thought) which had a particular place in Barrow’s memory. Much of this book is a free flow of consciousness based on the journey; observations on the limitations of campsites, small towns with limitations on parking, problems with finding campsites, and a tablet that just does not work. His relationship with Kathy, the Sat Nav in the Truck, is often tricky. Rather than follow paper maps he asks her to navigate him in and out of places, but he still gets cross if she directs him onto roads that are too big for him. The real Kathy, Kathy Clugston radio presenter and sat nav, commented on the book “A compelling search for the meaning of life…and quite a lot of swearing at me”. There are memorable moments, such as the unexpectedly terrifying boat trip up the Severn, and Tintagel castle, as well as the ongoing difficulty of visiting one county a day and finding a suitable campsite.

Anyone who has lived or travelled in England will find a reference to a place they have visited in this comprehensive book. I enjoyed spotting places that I know such as Durham, Ely and a tiny village called Happisburgh on the Norfolk, which thanks to coastal erosion can be a hazardous place to camp in, especially near the cliff edge. I found this an addictive read, wondering which point Barrow will reach in each county, which campsite he will choose and how he will avoid the biggest road. His observations and ponderings are sometimes a little difficult to follow, but they are fascinating. I really enjoyed this book and can recommend it to anyone who has travelled in Britain even without a tent and a challenging sat nav for guidance, and anyone who wished they could.

I really enjoyed this book, and the mug with a quote on it. In case you cannot work out the quote from the lovely photograph that Northernvicar took and I didn’t manipulate into landscape, It says “It was hardly oneness with the universe, but it was very nice, so I decided to put the kettle on”. It sort of sums up the book for me, and shows how it is the best sort of armchair travelling which is so good at this particular time.