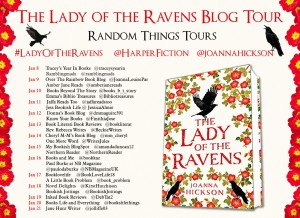 Ravens are special creatures, birds that have had significance through the centuries as a result of their appearance and apparent intelligence. Joan Vaux was a young woman who found herself in a particularity fragile royal court, and who becomes deeply interested in the ravens who live in the Tower of London. The court is that of Henry VII, who has just won the crown of England on the battleground from Richard III. Joan is a lady in the household of Elizabeth, the oldest surviving sister of the Princes in the Tower, and it seems that Elizabeth will marry the new Lancastrian king. There is hope that the two houses of York and Lancaster will finally be joined together, and the Wars of the Roses which caused so much death and suffering will be at an end.

Joan’s story is the fictional version of the woman’s view of what happened to the men, women and children who found themselves struggling to become accustomed to a new reign, and new peace. This vivid novel tells the story from a human point of view, the fear of fighting, the reality of love, birth and death in the richest households in the land.  I found it an immersive read that really drew me in, a positive account which really brought a time of challenge to life. I was so pleased to get the opportunity to read and review this brilliant historical novel where a determined woman really made a difference.

This story opens with the Joan being ordered to learn how to prepare and check a royal bed. As she enters the Tower grounds she not only spots some of the ravens but also sees how they are treated by some of the soldiers who are unnerved by the birds. When she confronts Sir Richard Guildford, the King’s Master of Ordnance, about the treatment of the birds, it is not a happy conversation, but will have implications for the rest of the book. As Joan returns to the household of the young woman who is unsure whether she will indeed be queen, she must think back to her preparation for her trusted role. Having spent time in wealthy households and seized every opportunity to obtain a good education, she combines her keen insights with a practical knowledge of basic medical skills. Her secret is that she does not want to get married, even in order to gain a more significant place in the royal household, mainly because she is terrified of childbirth. There is every reason to be in a world where basic medical knowledge took second place to superstition, and women did not always survive for reasons of basic hygiene.

As we follow Joan’s progress as she comes to terms with change and challenges with the progress of Henry’s reign and Elizabeth’s life. Joan discovers the reality of family, of love, and fear. She becomes more assured in her role at court, using her quick wit and determination to overcome danger to those nearest to her. Even her ongoing determination to maintain the number of ravens in the Tower so that the legend of keeping the kingdom is respected is not always easy. This is a mature and well written book that truly drew me into the narrative. I recommend it as a strong read for all fans of female led historical fiction, especially in the less well known periods of history. 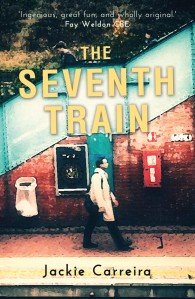 This is a book of train journeys that are significant for not really ever arriving as far as the main character is concerned. They are an adventure yet also an escape, from what and to where is never clear. While it tackles some difficult topics head on, it is also very funny. It is eloquent on feelings that many might have but few admit to, let alone take life changing action. Elizabeth is a fascinating character, and remains the strongest in a book that eventually introduces several memorable and surprising people. Beginning in London, this is a book which reveals a fascinating insight into the Suffolk countryside, as well as the realities of British trains. Tackling themes such as loneliness and the rules that govern lives, this is a book of great contemporary relevance and puts a sometimes comic twist on serious ideas. I greatly enjoyed its characterisation and pace, and I was pleased to have the opportunity to read and review this lovely book.

The book opens at Harlow Town railway station.  The announcer intones a warning of delay “This is due to a passenger on the line at Harlow Town”, a coded indication of a suicide in Elizabeth’s opinion. Managing not to argue with a singular woman in the cafe as other passengers gawp, she takes her coffee, shocked that the fatality is labelled an “inconvenience”. Daniel Cotter, the driver, realises that he has killed a human being, and is deeply traumatised. Elizabeth travels on to Cambridge, encountering in the cafe on the station a man who seems determined to discover why she is there, intent on taking a particular train, carrying no luggage to speak of, quietly determined. Then a memorable young woman arrives, loud, disruptive, encumbered with a suitcase obviously overstuffed with fashionable shoes and clothes. She breaks into Elizabeth’s thoughts, full of her own stories and phrases, most memorably “The world is my lobster!”. She wants to go to Brighton explore on her own, discover the world, change everything for two weeks.  Elizabeth is pressed into explaining her story, her reason why “The seventh train” is important, even if she is not sure herself at certain points. She has her stories, and it transpires that she is not alone in making revelations. The train journey is the thing, but is the destination, the end, always important?

I found much to enjoy in this novel, developed from a play, which explains the realistic dialogue and deep feelings expressed here. There are surprises, but set in a context where they fit and make sense. The facts, the trains, do hold together, as I have some knowledge of one of the destinations mentioned in some detail. There are rules, there is a framework, an ultimately there is hope. This is a deceptively important book, with an unerring sense of purpose, even if at times the whole premise seems unfocused. It examines various experiences from a safe place, and demonstrates a great understanding of what makes the quiet, the anonymous  passenger on a train may be thinking, why they do what they do. Carreira is a watcher of people who has committed her imaginings to a novel which has a quiet power, well expressed, and which has the capacity to make the reader think, while being entertained. I recommend it as an excellent read for all those who wonder about other people, and indeed their own motivations, when travelling on trains.

I have of course recommended this book to Northernvicar! He will no doubt give his verdict on at least the train information ( but the pieces I have read him have met with his approval!)