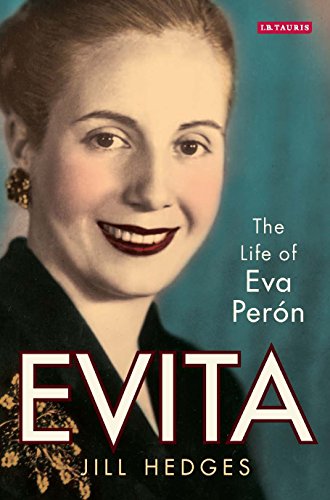 Evita  – The Life of Eva Peron by Jill Hedges.

A very different book for review, a non fiction biography of Eva Peron. The subject of the musical “Evita” which has been popular since its first performances in 1980, Eva Peron was a political and social force in Argentina in the late 1940s until her early death in 1952. Even after that time her image has been significant in Argentinian politics, not least because of her support for Juan Peron, who became President, then exiled, before returning as President once more in 1973. This book attempts to examine how a woman in a complex political situation dominated by men came to achieve a certain power and undoubted influence which still resonates today. A woman whose image is still recognisable in Argentina despite the terrible political upheavals and tragedies that have afflicted the country for many decades. A serious biography which has made every effort to consult and reference sources, this is a book from an established Latin American historian which attempts to provide the general reader with a readable account of a remarkable life.

The book opens with a description of Eva’s appearance at a rally attended by some two million people, mainly supporters, who were present to press her and the political leaders of the time to nominate her for the role of Vice President to her her husband, Juan Peron. A radical proposition in a country which had only recently given women a vote, it was seen as a step too far by many men nervous partly of Eva’s personal following, and even her husband was thought to be less than convinced politically. The question was largely moot, however, as Eva was seriously ill with cancer that would kill her within months, and she was to reject the people’s calls for her election to political office. The book goes onto look back at her life, how she had arrived at such a position that so many people demanded her elevation to ultimate political power. It details the many uncertainties of her early life as the child of a family managed and supported by a strong single mother whose relationship with Eva and her several siblings’ father was a matter of conjecture. The exact terms on which her mother supported her growing family, and Eva’s own arrival in the capital, Buenos Aires in 1935 “as a young, poor woman from the province with no contacts, no money and no training” is examined in a complex chapter which examines many sources. Her own autobiography of doubtful authority (as examined over several chapters, not least the penultimate account of her final illness) is referred to, as are the records of magazines, theatre companies and the fledgling dramatic radio stations which became popular as Eva sought influence and fame, via enough money to survive. There are also accounts of her liaisons with various men associated with different media ventures, perhaps suggestive of no more than innocent career building in a difficult society where women were denied many career options. Her relationship with the ambitious widower Juan Peron has been the subject of much speculation and debate; Hedges chooses to relate various accounts of their seeming genuine affection for each other from the beginning. Perhaps the most significant section of the book are the well attested descriptions of Eva’s minute involvement with the poorer citizens of the country, especially women, who approached her for help with many practical problems. Her somewhat manic workload and establishment of her Foundation provided such practical items as sewing machines, accommodation and real help on a piecemeal basis, only later transformed into buildings and solid organisations to help significant numbers of people. Her tour of Europe is also described, with reference to a letter that she is reputed to have sent her husband on the eve of her travels. The long term nature of her illness is well explained insofar as limited sources allow; there is still much guesswork into her attitude to her own mortality and work ethic.

The main question of this book remains central. Does it in any sense explain the phenomenon of Eva Peron, the mass adoration, the nationwide trauma of her death? It would seem that this is a brave attempt. It makes few assertions of an ambitious nature; it backs up so many points and highlights the potential bias of each significant source. While not dynamic and headline grabbing in its style, it is a readable book which organises a wealth of information well and focuses on a woman who chose to be deliberately obscure even in regard to her birth certificate, and probably largely dictated writings were intended as much for political propaganda as the wish to leave a definitive account of her life. This book is approachable for the non Spanish speaker and the non – political expert, while maintaining a scholarly style. As an account of an intriguing and significant life it is an excellent read, with sufficient bibliographical information to enable further study.

So this is a very different post or review for Northernreader! The life and legacy of Eva Peron is part of my conference paper as a module of my MA course, and this book is a significant source which has taken me some time to read, so I thought that it would be interesting to  review. Given its nature I imagine that I am going to referring to it a lot over the next couple of weeks. Wish me luck! (there are many easier to read novels and books to come!)