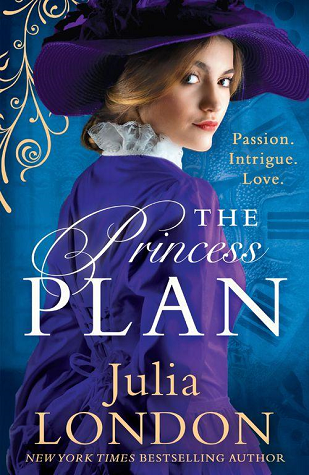 A handsome, wealthy young prince is in search of a wife in London 1845. His attention is taken by an unusual woman, and everyone else is shocked. A standard romantic theme but added to greatly by the personalities and setting chosen by the author Julia London, as the heroine is an argumentative and down to earth young woman with a mind of her own. Eliza is not rich, not young by the standards of the day, and a woman who was publicly humiliated in her past. Prince Sebastian is the heir to the kingdom of Alucia, a small but resource rich country in Europe, who has been brought up with every attention, guarded obsessively and who must find a wife. It is an unlikely meeting at a masked ball that brings these two unique people together, but it is a murder which means their relationship continues. This is a well written novel with characters who have quite a modern dialogue, but which works well in the context of this novel. I was so pleased to have the opportunity to read and review this imaginative and enjoyable novel.

Eliza is a young woman who lives with and keeps an eye on her father who is an active judge and is also blind. Polly is officially a servant, but in the small household she is regarded as a friend. Eliza was badly let down by her first love, and now enjoys the limited and active society provided by her widowed sister Hollis, and their friend Caroline. Hollis and Eliza produce a gazette or magazine for ladies  which is filled with gossip, fashion and household tips. It is partly to gather material for their publication that leads to their attendance at a masked ball at Kensington Palace, given in honour of a Prince. Prince Sebastian and his younger brother Leopold are visiting with their entourage as trade links are needed, and it is understood that Sebastian must find a wealthy and well connected English wife during his visit. It is an accidental meeting with the tipsy Eliza that makes Sebastian begin to regret the parade of suitable potential brides that he must navigate, and she resolves to remember the evening into her future.

When a good friend of Sebastian is found murdered, the gentle romance becomes somewhat darker. As the British authorities seem ineffectual , Sebastian decides to take a hand in investigating the crime. Eliza gets involved when she receives a note that highlights a potential suspect, and soon Sebastian does things that stretch his expectations, fascinated by Eliza whose different behaviour confuses and attracts him.

This is a funny, intriguing and thoroughly entertaining book. There are small quibbles, as the pavement in a London street becomes a “sidewalk”, and Eliza does push the boundaries a lot further than Victorian social networks would accept. The second point is part of its charm, as Sebastian is attracted by the first woman who questions him and his actions, even makes fun of what he does. I really enjoyed their budding relationship, as they seem to be intrigued by each other despite their perceived roles and limitations. This is a book of dances at fine balls, but also the home that Eliza runs, characters who surround the Prince and the young woman who he finds so interesting. A lovely romantic novel which pushes the boundaries, but is enjoyable and unusual, engaging and exciting. I recommend this to all fans of historical romance, especially those who enjoy something a little different.