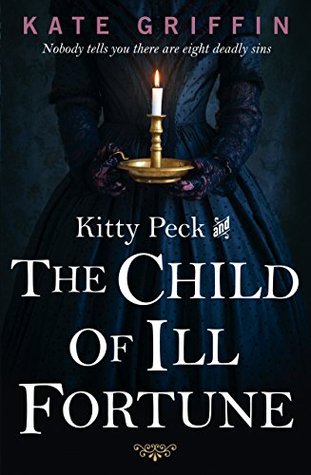 If you remember a novel called “Kitty Peck and the Music Hall Mystery”, this book is the sequel or second one of a series concerning a Victorian Music Hall empire which did not hold back on detail. The first book was remarkable for the clever way it described the London streets and buildings in intense detail, but without unnecessary padding. The people around young Kitty are also described with honest realism, old or young, scarred and beautiful. Kitty’s situation at the end of that novel is a stunning surprise to all, but I think it would be possible to read this present book with enjoyment as a standalone novel.

“Paradise” is the ironic name of an area of London’s less salubrious back streets, riverside, buildings containing dubious businesses, and the three Music Halls in which Kitty and a number of the main characters work. The running of this business involves not only obvious accountancy skills which are undertaken by the “Beetle”; a legendary character, but the moral grey areas of exploitation of people. This is a book which contains violence and fear, tension and deceit. Several characters are not what they seem on various levels, and there are some confusions which inevitably involve the reader in flipping back to check for clues. It is told from Kitty’s point of view, and there are splendid details of her newly acquired dresses, contrasted with the less than neat circumstances that she finds herself in throughout the novel. A small child is in peril, other people die, and this is high melodrama of the most dramatic kind. Family members give Kitty problems, but in the same way she begins to understand the pressure that they have been facing.

This is genuinely a tense, gripping read which holds the reader’s interest from beginning to end. Kitty Peck in this book is not really affected by many romantic distractions herself, even if her companion Lucca is afflicted. There are so many challenges to face on so many levels that Kitty must develop independence and self -belief fast, even if she becomes overwhelmed by the whole picture. She emerges as brave and immensely resourceful which is good as danger threatens everywhere, and she can only depend on herself ultimately. I confess that ending is haunting, and perhaps best not read late at night. This is a grim book in many ways, though totally absorbing. I do not want to spoil it for anyone, but there is another book just out which always suggests that Kitty survives.

This is a book which would be enjoyable for anyone who enjoys historical novels with mystery and adventure. Perhaps far fetched, perhaps the whole idea of a fiercely independent woman with such power is anachronistic, but it is a stirring and enjoyable book which I recommend highly to both fans of this genre and those keen to discover more about Victorian London from an impeccably written novel.

I know it’s been a long time, but I’m Back. A lot has happened since I last posted here, some of it pretty horrible, but I have kept reading so here is the first in a series of posts about some of the many, many books that I have discovered.

This book was recommended to me by Rachel, long time friend of the author. I was pleased to be able to find it in a bookshop and devoured it really quickly. Which is impressive if you could see how many other books I have around me to read…

It is a book about a teenager who is working behind the scenes in a Victorian Music Hall. She has lost everyone in her family, which sounds grim until the story develops and there is a glimmer of hope that someone has survived. She is forced into starring in a new act as Lady Ginger, who runs all the dubious “businesses” locally, engages her to find out about the girls who have been going missing from the area. There is peril, excitement and danger  while Kitty works out who is to be trusted, and who is a real threat.

The real excitement of this book is to be found in the descriptions of life in London in the 1800s. I have read my fair share of Victorian novels, as well as more modern efforts meant to be set in the period, and this is novel incredibly convincing. Griffin manages the details without slowing the action of how it felt to walk through the streets of London in the dangerous hours of night. The atmosphere is terrific, the fear feels real, and the characters are consistent. It is a book that keeps moving, keeps involving the reader, and carries the story well.

There are other books like this out there, but this is not a pretentious read which shows off its research and ambitions. I think there are a few more books to come from Kitty (and Kate!) and I will definitely be looking out for them.