The Mystery of the Sorrowful Maiden by Kate Saunders

This is the third book in the series, but I would argue that it works really well as a standalone, such is the quality of the writing and the narration of the main character, Mrs Laetitia Rodd. Set in 1853, Mrs Rodd is on the one hand the widow of an Archdeacon of slender means, but she is also an extremely effective private detective of great discretion. This is the third book that I have read and greatly enjoyed by Sauders; this is a series I buy as soon as I discover a new episode, and then struggle not to sit and read it immediately. The combination of an extremely consistent protagonist who succeeds partly as a result of her family connections, and her sensitivity to people, with a sure hand with the setting, in this case high Victorian London. The plot may not be the most watertight, but it is satisfyingly surprising and complex, and is well carried out throughout the novel. The research behind the writing is impeccable, on this occasion into the theatres and celebrity actors of the time, but is never allowed to interrupt the narrative. The characters are as over the top or as subtle as required by their roles in the story, and the clothes and their settings in rooms and other venues are so telling. It is a novel of historical crime, sometimes shocking but never unnecessarily gory or women as victim standard. Mrs Rodd, it is frequently asserted, is not easily shocked, but she does reveal some of her uneasiness at dealing with theatre people who had notorious reputations at this time. Altogether I think it is a most entertaining and enjoyable book.

When the book begins Mrs Rodd is comforting her friend and landlady, Mrs Bently, who has been ill. Their little household is under financial strain, so when a neighbour arrives with a request for her services, Mrs Rodd is very willing to help. Mr Tully lives alone as a retired actor, who was injured in saving the life of the great actor manager Thomas Trescome, who has decided to leave his wife Sarah. Mr Tully is concerned that Trescome will abandon Sarah without a decent settlement, and wants Mrs Rodd to advise her. Mrs Rodd soon discovers that there is a complex family situation, as Trescome is involved with a radiant young actress, Constance. His relationship with his eldest daughter, Maria, was excellent, but she has eloped with the son of his sworn enemy, and the two families seem to be determined to continue their feud. The next daughter, Olivia, is still devoted to her father, but seems to disappoint him. Cordelia is the youngest, and currently living with Sarah, but seems withdrawn and mysterious despite her father’s previous support. Mrs Rodd, with the help of Blackbeard, a police inspector who greatly respects her abilities, and her brother Fred, a famous lawyer, has to investigate the ins and outs of a complex situation. It takes her into the less salubrious parts of London theatres, the emotionally dramatic world of actors and actresses, and the shocking behaviour of men and women that can easily result in danger and death.

I found this to be a deeply satisfying read, well up to the standard of the previous novels, and strongly recommend the discreet investigations of Mrs Laetitia Rodd and her colleagues to anyone who enjoys thoughtful historical mysteries pursued through the streets of Victorian London. 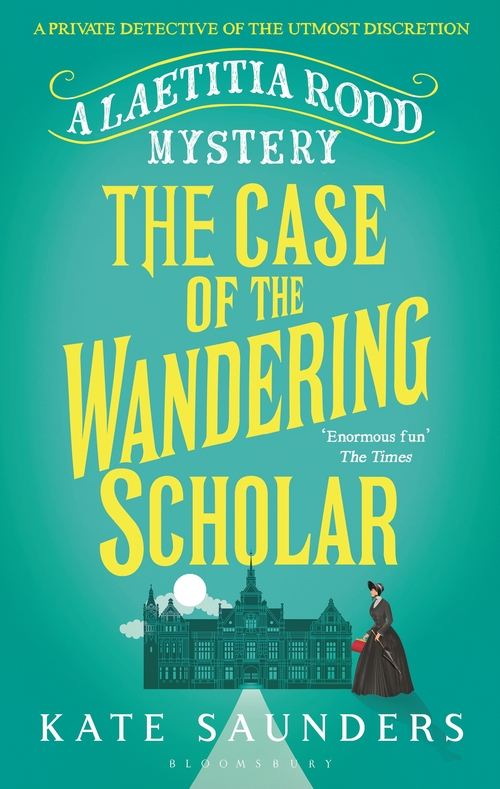 This is the second book in a brilliant series featuring the clergy widow, Laetitia Rodd, who searches for the truth in the Victorian era. Frequently hired by her brother Fred whose own clients need people found and crimes sorted out, this is a mainly gentle mystery novel full of brilliant characters. Impeccable research gives a solid basis for this novel, yet it is carefully woven into this book narrated by a woman who is well connected, intelligent and resourceful. Being a clergy widow with no children of her own means that she has met and befriended people in many places and of many types. She shows genuine empathy with those who are suffering, appreciation of those who are doing their best, and fortunately for this book, an instinct for those with a past. The setting for this novel; the less grand houses of London, the streets of Oxford and the countryside largely untouched by industry in 1851, is impressive and entertaining. We learn about the dresses, the meals, the decor and the everyday details of life, but without the plot suffering at any point. The religious differences demonstrated between some of the characters could be a little obscure, but Saunders handles it well and they become embedded in the identity of the people portrayed. This is a thoroughly well written book which is very enjoyable as a historical novel as well as a series of mysteries.

Laetitia Rodd lives in reduced circumstances with a friend after the death of her beloved husband, but happily her brother Fred who is a leading barrister brings her small jobs that require some delicacy and sensitive investigation. On this occasion he brings her to a very rich man who is dying, but who is desperate to see his only brother before it is too late.  Armed with expenses and mindful of the problem of tracing a renowned hermit who shares a tragic past with his brother, she adopts her usual practice of staying with her friends, a couple, Arthur and Rachel, who she encouraged to marry some years before the disappearance of Joshua Welland. As she immerses herself in the life of the countryside where he was last seen, she meets Arthur’s curate Mr Barton, and a local benefactor Mr Arden. Mrs Watts – Weston, married to an Oxford don and a formidable woman, provides valuable background and transport for Laetitia, as well as a good grasp of knowledge. As one mystery looks to be solved, another greater tragedy occurs, and Laetitia must rush to help.

This is a book that I had been eagerly waiting for after reading “The Secrets of Wishtide” with great enjoyment, and happily it did not disappoint. It is an excellent standalone, providing a great story of the further adventures of a lady who involves herself in people’s lives in order to investigate and help. She is a lady of determination and resource who combines a great sense of humour and a genuine interest in people. A non brutal crime book which really involves the reader, I recommend this book to anyone who involves a good historical mystery with excellent characters. 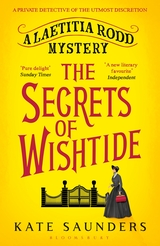 The big question I was left with after reading this book is, are there going to be anymore Laetitia Rodd mysteries? I enjoyed it so much that I can only think that there must be a series in this; it was not great literary fiction but a fascinating read. The body count was a little high and it was gory at times, but certainly not as graphic as many pseudo Jack the Ripper type books that are around. It also threw in a little element of thriller at the end, which added greatly to the story if not the realism!

There is probably a sub genre developing of Victorian/Edwardian lady detectives, which admittedly does fit the actual beginnings of the crime classic “female detectives” which did emerge. There are one or two that feature brothel keepers, but in this case Laetitia Rodd is an eminently respectable archdeacon’s widow of immense resource. Sadly her much loved husband also left her impoverished and forced to find lodgings with a friendly Mrs Bentley. Her connections remain impeccable, however, and when necessary she can call on a network of clergy friends throughout the country. She is also a shrewd judge of character, which is very useful when she is called upon by her much loved brother Fred to help on another case. Fred is a famous defence lawyer, and employs Laetitia to make discreet but vital enquiries into the background of his clients.  On this occasion her expertise is directly sought when Sir James Calderstone employs her to assume the role of a governess to his two daughters while discovering the background of a woman his son and heir wants to marry.  Mrs Rodd is happy to do so if only to provide for some extras make her home with Mrs Bentley more comfortable, but she soon becomes intrigued by the Calderstone family and their secrets, as well as the beautiful if tragic Helen Orme. Disguises, coincidences and murder follow, with attempted blackmail and painful truths thrown in for good measure.

This is an enjoyable novel which moves a lot faster than the real Victorian tome it mimics, packed with characters (possibly too many?) who all contribute to the tale. It is a little too dependent on coincidence, but well within the detective novel rules. I enjoyed reading of Mrs Rodd’s adventure and her summing up of character and situations. References to clothes and transport alone make it a well -researched book, even if she does have an unusual amount of access to police, prisons and dubious places for a woman of the time. It is not great literature, nor does it have pretensions to be, but a solidly satisfactory read which is entertaining and well plotted. I would recommend it for a holiday or weekend read when actual Victorian literature is too much, but an adventure in the past is tempting.

We are now back from a lovely holiday which combined all the best elements of rest and exploring lots of favourite places. I will try and get Northernvicar to let me have a few photos which record our travels and the discovery of a wonderful library…

I did manage to get enough internet access to put some posts on this blog, especially as they were for blog tours. Do look back for the classics Alice’s Adventures in Wonderland and Around the World in Eighty Days just republished by Legend. There is also a review of a really interesting book about a lighthouse community: “Skylarking” by Kate Mildenhall is well worth tracking down. A tough but clever book is ” Rain falls on Everyone” which I reviewed recently and is not really holiday reading, but a fascinating contemporary novel. Lots of reviews to come, if only Selwyn the Vicarage cat will let me type…