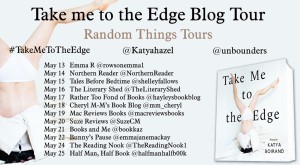 Poems that entertain, that challenge and that make the reader think are captured in this book. Combined with photographs that are anything but predictable, this book is a delightful and satisfying treat available to many people who would enjoy such a package. The concept behind the poems is at once unifying and unique. Various people have given Katya five words, often big in concept but not necessarily long in length, which Katya has used to construct a poem. While each poem is untitled, and most are very short at around eight lines each, they stand independently as well as collectively as visions of life. The use of photographs to enhance and expand on the poems is exciting and affirmative and pushes the book into another league of impact. I found it especially interesting that each person is featured in the back of this book, along with some detail of the character and their chosen words. Though rather expensive, this is a book to be proud of, representing twenty nine perspectives and portraits of people with distinctive flair. I was pleased to be invited to read and review this unusual book.

This book covers many aspects of life, often positive, sometimes moving and always with some impact. The photograph is not always predictable from the words; for example the Matt McCabe poem has the memorable line “Fold fear beneath love”, which strikes an unusual chord with the image of a clown jumping high on Westminster Bridge in London. The women are photographed as ethereal, joyful and often beautiful, while the poems are often wistful and subtle. The writer’s mother Trish Campbell contributes Phoenix and Angel among her five words, and there is a  sadness in the line “Phoenix ashes dormant, Drenched in salty tears” as she is pictured emerging from the sea. The suggestion of pain in the line “Existential salt in the wound” contrasts strongly and effectively with the later line “Maintain a life So down to earth”. These poems are strikingly effective and read well aloud, cleverly suggestive in the case of David Urban’s page “Screaming out conflict”, especially when combined with a shadowy photograph. The Kwaku Osei – Afrifa poem is a delicate poem to begin with, as “Lavender mist rolls” but soon clashes with “Ricochets fast” and “Stripped naked in kind”. It is interesting that the person who provided the five words is identified as “a man of words, a writer”, as if he particularly inspires the author.

“The project and the creation of the book” is a result of of the decision to use ‘found’ words, but there is no constriction in their use as Boirand is too expressive to be limited. This book brings together so many ideas which are handled really well, with a confidence and maturity which promises much. This book is colourful and effective, and essentially enjoyable, with an unusual idea at its centre.

Meanwhile I am still fighting with my talk on the show “Evita” for our upcoming conference. I have discovered that even I can get a bit fed up with the same songs and images of Madonna as Eva Peron, even though the film is pretty impressive as a whole. Finding the academic reaction to it is also a little challenging. Still, an excellent book group yesterday on “The Diary of a Provincial Lady” provided some interesting views! Watch this space for a review.