This is number nineteen in a series of twenty mysteries, but it is probably possible to read it as a standalone novel, once the basics have been grasped. Fans of the tv series “Miss Fisher’s Murder Mysteries” will quickly pick up the context of the story. Miss Phryne is a wealthy woman living an independent life in Melbourne, Australia in 1929. She has a taste for discovering the truth about people and solving mysteries, whatever the danger and cost. She has many contacts in the high and low life of the city, as well as the medical and legal authorities, and exploits them with wit and intelligence as well as generosity.

This particular novel in the series is a strong story. There are at least three mysteries to be solved which quickly emerge as Phryne organises the rescue of a determined girl reporter, who subsequently disappears. Three heavily pregnant girls also go missing, and in trying to track them down Phryne discovers abuse and domestic violence, which she tries to ensure is not continued.  Girls are also disappearing in what seems to be a slavery ring, and this must be stopped. Phryne’s own resistance to organised religion, in contrast to her devout assistant, Dot, is raised when she investigates the treatment of pregnant unmarried girls by a local convent. All this activity is overseen by the friendly policeman, Jack Robinson, and Phryne’s unique group of friends and allies.

To a certain extent the reader needs to suspend disbelief to enjoy this book, as the main characters do amazing things. Like James Bond, with whom Phryne has been compared in her exploits, she can summon up unusual abilities and disguises at will, and the reader knows that she at least will always survive. That is not to suggest that the writing is lightweight or less than consistent, as Greenwood’s writing is stylish and full of humour. Her characters are attractive in the main, and her culprits and villains suitably loathsome. As in all her novels, her research is impeccable, and the back stories of each character are understood. Greenwood also takes great delight in describing the clothes of many characters, especially her heroine’s, and the reader is left in little doubt that Phryne’s attraction to all is easily explained. I was a little surprised that the entire household become so involved in the investigations, but these are an unlikely group which has emerged over the series of novels.

This is a most enjoyable book and is obviously very late in the series. It could be read on its own but would be more appreciated if some or all of the earlier books had been read before this one. I have read them out of order as I borrowed or bought them, and they are easily followed. I find it a great alternative to heavier literary fare, and would recommend it as a historical adventure.

One of my other obsessions (apart from books, chocolate…) is Netflix (other tv services are available, but probably not as cheap). Through searching for something else to watch, we found the Miss Fisher mysteries. In case you have not yet found it, this is an Australian series about a wealthy woman private detective, set in the 1920s, rejoicing in the name of Phryne Fisher. She has many unlikely adventures as she solves cases of murder and mayhem in Melbourne, while wearing amazing outfits which would normally preclude climbing walls and advanced self defence.

I searched out the first three books in the series of Phryne Fisher mysteries which I had bought on a whim a while ago from The Book People. They are great! The first three books are quick reads, setting up the characters and situation of detection and crime solving. They are not immensely challenging in terms of mysteries, but the solutions are satisfying in terms of character. Set variously on trains and planes, as well as the neighbourhoods of Melbourne, they seem fairly correct in terms of transport, fashion and behaviour for the period. The characters overlap with those in the TV series, but as you would expect are more complex and rounded. Some of the relationships differ, but essentially these are the same stories. The early books are lightweight, enjoyable reads, with interesting insights into the time and places in which they are set. I enjoy reading about the scandalous progress of Phryne as she, together with her well paid and interesting household, solve mysteries. They are far more detailed than the TV versions as you would expect, given a greater range of character possibilities and setting. They are variously set on trains and early planes, on the basis that Phryne is equally at home wherever she finds herself.

The later books, which I have borrowed from the library in two cases, become more complex and frankly, interesting. In Death Before Wicket there is an interesting sidelight on women’s choices when their husband becomes unable or unwilling to support them. There is an interesting view of academic life, while circumstances and characters combine to comment on bohemian life on the fringes. These are not great physiological works, and it is nearly impossible to get bogged down in plot or setting. This is a funny book, with some adult themes. 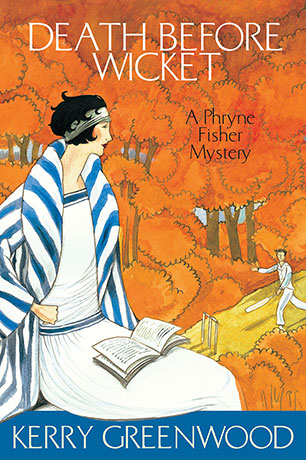 Murder on a Midsummer Night  is a later book, and boasts two mysteries which Phryne is asked to solve, each of which necessitate bringing in various members of her circle.  Thus the Comrades of the taxi join forces with charitable ladies, a seance which succeeds a wake becomes deliberately  spooky, and family splits get mixed with scandal. I really enjoyed this more substantial novel in a good series, and found it more challenging and therefore more satisfying. There is still the same eye for clothes, decor and character, but this book presents them in a more significant way as contributing to the novel overall. It is not great literature, but is nonetheless worth reading for pleasure. It even boasts a detailed Bibliography, surely rare in a novel, but it is very interesting. Another point worthy of note; most of the action takes place in boiling hot, uncomfortable weather. In January. It’s Australia….

These books (and author!) have even got their own website:http://phrynefisher.com/ which lists all the books.

So if you want an unusual read, and plenty of books in a series, try tracking down these books (or TV Programmes!)

Oh, and the other big book of the day, Go Set A Watchman?. Husband went and bought me a copy, and so far so good. The general impression from articles and interviews with early readers suggests that the overall novel is not so strong, but the writing seems to me very good; including a very funny incident on a sleeper train….